All you need to know about running electric fleet vehicles

Find out the pros and cons of your business running electric cars, and whether now is the time for your fleet to go electric

Many of the incentives for running an electric car on your company fleet – be it large or small – are the same as for private buyers.

The problem is that many of the fears and drawbacks are also the same, from the driving range of the car to the comparably high lease or purchase costs. Here’s the DrivingElectric guide to electric cars, which will help you decide if now is the right time to start introducing pure electric cars to your fleet.

Capital allowance is a system that allows you to deduct the value of a business-use asset from your taxable income. Electric cars, or any car that emits less than 75g/km of CO2, are currently eligible for a 100% write-off as they qualify for ‘first year allowances’.

This means you can deduct the whole value of the vehicle from your profits before tax – an incentive brought in by the government to increase fleet use of low-emission vehicles, and a handy way to cut your tax bill. It’s a definite benefit to going for a plug-in hybrid or full electric car.

The flipside to the tax savings you can enjoy if your company purchases the vehicles is that leasing costs tend to be higher than those for comparable petrol or diesel vehicles.

Still, the Nissan Leaf 40kWh is available for well under £400 per month, even in a high spec and on a maintained contract, and with newcomers including the Vauxhall Corsa-e, Peugeot e-208, SEAT Mii Electric and Skoda Citigo iV all driving finance and purchase costs down, it’s only going to get cheaper from now on. 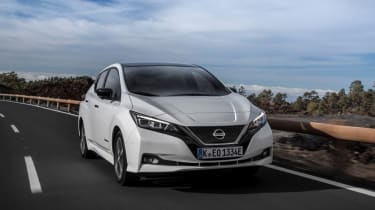 Electric cars cost far less to fuel than a petrol or diesel car. Based on an average price of 14p/kWh in the UK, it'll cost just under £9 to fully charge a Kia e-Niro or Hyundai Kona Electric 64kWh. Cars like those should cover some 230-260 miles to a full battery depending on the temperature and type of driving.

Electric cars with smaller battery packs of around 40kWh will cost some £5.60 and typically cover 140-160 miles. That works out at around 3.7p per mile for electricity, even assuming you don’t have a cheaper utilities package, as most corporate or industrial outfits will have.

Electric cars are exempt from VED road tax (although they are subject to ‘premium road tax’ if they cost more than £40,000) and enjoy free entry into the London congestion-charging zone. Even parking is cheaper for electric cars in some parts of London, and with emissions-restricted zones set to roll out in various other major cities across the UK, this incentive is only going to become more important.

The Hyundai Kona electric 64kWh and Kia e-Niro are the best affordable electric cars for range, returning some 250 miles in real-world driving, but at the time of writing there are long delivery times for these cars due to battery supply issues.

Waiting times for electric cars promise to improve drastically from 2020 with the arrival of new contenders such as the Nissan Leaf e+, Vauxhall Corsa-e and Peugeot e-208 – all of which have an official range of over 200 miles.

There's also a range of new premium electric cars, including the Jaguar I-Pace, Audi e-tron, Mercedes EQC and Tesla Model 3, which will also all do 200 miles or more in the real world and promise to be cheaper to run than any similarly plush and potent executive SUV or saloon.

It’s also worth noting that the public charging infrastructure is improving, with super-fast chargers from BP Chargemaster and Ionity starting to pop up across the UK and promising to make high-mileage electric driving much easier as their numbers increase.

Charging infrastructure in the workplace

Charging is one of the biggest concerns for fleet managers when it comes to electric cars. Smaller companies with modern premises and private parking should have no issues getting chargers fitted in the normal way, given that 7kW chargers are generally easy and affordable to install. You’re unlikely to need faster chargers unless you run electric commercial vehicles that need to be in use as much as possible.

If yours is a large company and fleet – or indeed a commercial-vehicle fleet – that would require dozens of charging points to support a lot of electric cars, you should start by speaking to a charging provider such as ChargePoint, BP ChargeMaster or PodPoint, which can offer a consultation on what your company requires.

It's possible that your premises may need upgraded electrics to support a large number of charge points. The cost of that clearly varies depending on the upgrade required, but is typically very expensive.

Mark Kerstens, head of global fleet solutions at ChargePoint, points out that “the key is to start small and plan big. It’s important to plan for it being a 50-car electric fleet at some point, even if it’s only a five-car electric fleet currently. Different people in the company need to be involved, too. Facilities play a crucial role, so involve them from the start.”

There's also software available to help manage the strain on the grid. Kerstens told us that ChargePoint “has software that merges with building management and in real time can optimise the charging demand, so that you don’t go over a certain ceiling, reducing the operating expenditure by staying within a certain limit. And if you do draw too much from the grid, you can look at site-specific battery storage.”

Charging etiquette in the workplace

It's even possible to get apps to help manage charging, where employees charging their cars get notified when their charge is finished, and told who's on the waiting list to use a charger. It can be incentivised with fines but, according to Kerstens, “many companies using the app simply trust their staff to do the right thing, and see great results.”

Employees can benefit enormously from running electric cars. Their Benefit-in-Kind tax costs and fuel costs will be usefully lower than those of an equivalent petrol or diesel, and the cars give them free access to London and other restricted city-centre low-emissions zones that are imminent in the UK. It’s also possible to negotiate with charging-point providers to supply home wallboxes for your employees, as well as to supply charge points in the office car park.

And, of course, cleaner air quality in built-up areas is another huge bonus to electric propulsion, and a critical driving force for more urban-based company fleets to go electric.