A great all-round premium electric SUV, the Mercedes EQC is slightly overshadowed by others in its class

The Mercedes EQC is the first bespoke pure-electric model from the German brand, but it sticks its rather brash-looking nose into a premium electric SUV class that already includes the Audi e-tron, Jaguar I-Pace and Tesla Model X. It’s got tough competition, then, but the EQC appears to stack up well despite that.

For a start, an 80kWh lithium-ion battery pack powers two electric motors (one on each axle to deliver active four-wheel drive), enabling a driving range of around 250 miles. Charging is via Type 2 or CCS ports, which will deliver a full charge from a 7.4kW home charger in under 13 hours, while 110kW DC fast charging capability allows for a 10-80% top-up in under 40 minutes.

Also, using the ‘Mercedes Me Charge’ smartphone app – standard on the EQC – you can register payment details and then use it for easy one-hit payment with some 80% of charging-point providers – including the UK's biggest single network: Polar by BP Chargemaster. You can also use the app to control and view the car’s charging status and climate control, as well as sending driving routes directly to the sat-nav system from your phone.

This is all very comparable with the competition, although the Model X still has a distinct advantage in the form of exclusive access to the well established Tesla Supercharger network. Comparably fast public rapid chargers of 100kW or more (which any electric car has access to) are only just starting to appear on UK motorways.

The EQC's performance is far from shabby. As you’d expect of an SUV with 402bhp and 765Nm of torque, it accelerates with nonchalant brutality, although it never feels quite as strapping as the 5.1-second 0-62mph time suggests. There are various drive modes that you can cycle through, but regardless of which of the variable steering and throttle settings you choose, the EQC is a consummate cruiser. 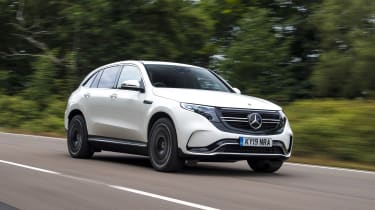 It's also easy to drive around town, particularly with the regenerative braking system in ‘auto’ mode, which varies the brake forces automatically in a smooth and intuitive fashion.

However, it has to be said that the Merc is also less finessed through corners than some of its rivals – particularly the playful and more enthusiastic I-Pace. While surefooted and easy to enjoy on a good road, the EQC always feels like a heavy car that’s focused on comfort and refinement, but having that distinct character to set it apart from firmer-riding rivals is no bad thing.

Even by the supremely excellent refinement standards of its peers, the EQC is notably quiet. There's no engine whine, very little wind and tyre noise, and what feels like class-leading comfort – on the smooth Norwegian roads we've driven it on, at least. Here is a car that unashamedly aims to soothe your brow rather than raise your heart rate, and does it very well.

That's thanks not least to the interior, which is one of the Mercedes' real selling points. The rose-gold coloured vents may be divisive, but the simple yet striking architecture and variety of tactile materials feel superb. And of course, there's also that panoramic screen that stretches from the centre of the dashboard to behind the wheel.

Complete with a huge touchscreen, touchpad, voice control and top-notch graphics, it isn’t always easy to use – the voice control is hit-and-miss, and some functions are well hidden behind confusing icons or deep in layers of menus. However, the key functions are easy to get to grips with from the off, and the screen itself has some of the best graphics you’ll see in a car.

Overall, the Mercedes EQC is a seriously compelling electric car that plays the comfort and technology cards very well, but it still struggles to offer a unique selling point comparable to the greater range and practicality of the Tesla Model X and the far superior handling and style appeal of the Jaguar I-Pace. The EQC's residual values are very strong, however. The only electric car that holds on to a greater proportion of its value after three years or 36,000 miles is the Porsche Taycan.

For more on the Mercedes EQC, read on for the rest of our in-depth review. 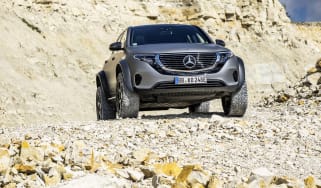