The evergreen Vauxhall Corsa has been given a new lease of life, thanks to a pure-electric powertrain. But can it compete with talented rivals?

For years, the Vauxhall Corsa has been a stalwart of UK driving schools and a favourite of young motorists enjoying their first taste of freedom behind the wheel. It has long been an affordable and no-nonsense sort of car, but the arrival of the latest generation sees it leap right to the front of the electrification revolution, with this pure-electric Corsa-e offered alongside the conventional petrol and diesel-engined versions.

Of course, it's possible we wouldn't have an electric Corsa just yet, had Vauxhall and its German sister brand Opel not been taken over by Peugeot and Citroen's parent company the PSA Group in 2017. That buyout means both the internal-combustion and electric versions of the latest Corsa are based on the same mechanical underpinnings as the current Peugeot 208.

The electric Corsa-e isn't as affordable as its internal-combustion counterparts; the cheapest version is priced from just over £26,600 after the government plug-in car grant has been applied, following pricing adjustments to the range for 2021. That puts it in the company of some pretty accomplished rivals, such as the Honda e, MINI Electric and Renault ZOE, as well as larger and more practical offerings like the MG ZS EV and Nissan Leaf.

The Corsa-e is driven by a 134bhp electric motor, drawing power from a 50kWh battery. Maximum range in ideal conditions is 209 miles, but we'd expect to see more like 150-170 miles in real-world driving – which is much better than some of this car’s style-centric rivals. Performance is sprightly and it handles well; refinement is excellent, too.

By almost every measure, then, the Corsa-e is a great small electric car. In fact, once you’ve got over the high purchase price (or nailed down a good finance deal), it’s hard to argue with that real-world range and those rock-bottom running costs. But ultimately, there are cheaper but equally capable models on the market, while larger, plusher rivals aren’t far out of reach, either.

For a more detailed look at the Vauxhall Corsa-e, read on for the rest of our in-depth review... 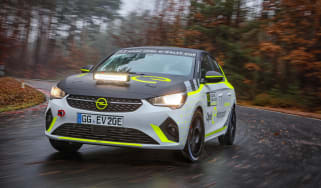 The rally-prepared version of the Vauxhall Corsa-e electric car has begun testing ahead of its competition debut in late 2020
Electric Vauxhall Corsa-e: specs, prices, pics and VXR on the way 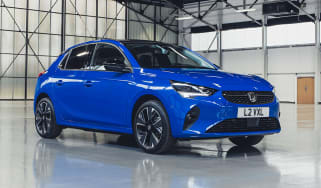