The Mitsubishi Outlander PHEV was once the go-to option if you were after a large plug-in hybrid car, but it's starting to get left behind by more up-to-date rivals

Buy used for less at Buyacar

The Mitsubishi Outlander PHEV was the first plug-in hybrid SUV, and it has been hugely popular since launch. Understandably so, given that – many years after it first appeared – the Outlander remains one of the most affordable ways into a large plug-in hybrid SUV.

However, the competition has moved on and you’ve now got rivals in the shape of the MINI Countryman Cooper S E ALL4 through to the more expensive Volvo XC60 T8 Twin Engine. And don’t discount pure-electric alternatives such as the smaller, but arguably better value Hyundai Kona Electric.

Not only that, but the Outlander PHEV is a tricky financial proposition for private buyers. There’s no government grant on plug-in hybrids any more, so you’ll need to find the full cash price (minus any discounts you can haggle), which can be nearly £45,000 for the top-spec model.

Company-car buyers can rejoice, though, as 46g/km CO2 emissions mean very low Benefit-in-Kind (BiK) tax – especially since the rules changed in April 2020, with potentially huge savings for buyers of plug-in hybrid models like the Outlander compared to a petrol or diesel equivalent. 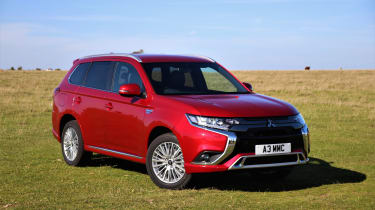 The Mitsubishi Outlander PHEV features a 2.4-litre, four-cylinder petrol engine with two electric motors – one on each axle – to deliver 28 miles of pure electric running.

In electric mode, the Outlander drives with the typical smooth refinement of an electric car, and even when the petrol engine kicks in it’s quieter than a diesel.

For all that, the automatic gearbox sometimes lets the engine rev higher than you may feel it needs to, and the handling is quite cumbersome. If you try to hustle it along with any sense of urgency you'll notice lots of sway in the corners and performance that’s only adequate at best.

There’s loads of space inside the big, bluff-looking Outlander. You’ll get three across the rear bench with relative ease, access is good for strapping kids in, and a driver of any size or shape should be able to get comfortable.

There’s no seven-seat option in the PHEV, as there is in the petrol Outlander and rivals such as the Hyundai Santa Fe and Skoda Kodiaq. Competition is growing, too, with the next-generation Kia Sorento hybrid trumping the Outlander for space and low running costs.

Overall, the Mitsubishi Outlander PHEV continues to plug a gap in the market, and it remains one of the best-value big 4x4 plug-in hybrids you can buy. Just stick to the lower trim levels, as it really is hard to justify the £40,000-plus models.

For more on the Mitsubishi Outlander PHEV, read on for the rest of our in-depth review. 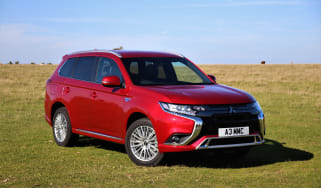