The Porsche Cayenne hybrid is a notch above its rivals in terms of driver reward, but we’d like to see lower CO2 emissions

When it first launched, the Porsche Cayenne was widely referred to as a 911 on stilts; it inherited much of the sports car's performance and handling, but in a practical and family-friendly package. It's something of a household name, these days, and the plug-in hybrid version, named E-Hybrid, goes to great lengths to try and justify that reputation as the leader of a competitive field.

This latest Cayenne E-Hybrid is fun to drive, and living with it on a day-to-day basis comes with a certain lustre. It's not as efficient as some rivals, but can offer an official electric range of up to 22 miles from its 14kWh battery. Charging will take around six hours from a normal domestic plug socket, while a dedicated charger of 3.6kW or more will do it in four, and you can even pay a bit extra to up the fastest charging speed from 3.6 to 7.2kW. Doing so will see your charging time drop to around two hours from a home wallbox or public charger.

However, bear in mind that the real-world electric driving range will drop the more you use the car's electric-only top speed of 84mph. After the battery has run out, you’ll be seeing 30mpg at best from the turbocharged 3.0-litre V6 petrol engine. Ultimately, as long as you plug the Porsche Cayenne E-Hybrid in regularly, you’re going to see remarkably low fuel costs given that you’re running about in a 456bhp, prestige 4x4. And it feels just as fast as you’d expect, given that power figure. 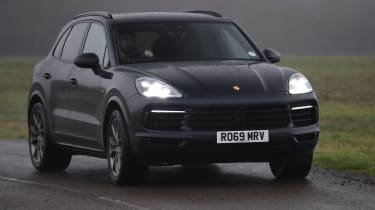 Acceleration is properly gut-churning, even from a mid-range prod of the throttle rather than a full-bore standing start, and there’s also some of the trademark Porsche handling ability – just perhaps not as much as you might hope for. An even more powerful Turbo S E-Hybrid version is just around the corner, too.

Certainly, the steering response is predictable and accurate, but it doesn’t offer as much feedback as you might expect. Meanwhile, the brake pedal response is inconsistent and often hard to judge for a smooth stop due to the unusually intrusive regenerative braking technology.

Practicality could seem rather below par if you consider the strictly five-seat Cayenne next to rivals like the similarly priced (yet bigger) seven-seat Volvo XC90 T8. But as long as you’re not fussed about the lack of a seven-seat option, then the Cayenne E-Hybrid offers masses of space and luxury for rear passengers, plus a huge boot.

It's a shame, however, that there’s no dedicated cable storage, so if you want to take the cables with you then you’re stuck with having a chunky bag in the boot. Even so, the Cayenne has always been more about prestige and performance than outright practicality.

Overall, if you’re in the market for a sports SUV then the Cayenne E-Hybrid feels like having your cake and eating it, guilt free. Keen drivers might be disappointed that the steering isn’t more textural and the brake feel more intuitive, but otherwise the financial and environmental benefits come at little or no compromise to the slick drive and addictive performance. The sightly more modern BMW X5 xDrive45e offers a more useful electric range of up to 54 miles, however.

If the even more nimble-feeling, even quicker all-electric Jaguar I-Pace is too restrictive for you, then the Cayenne E-Hybrid is certainly the next best performance SUV with electric running. For more, check out the rest of our in-depth review. 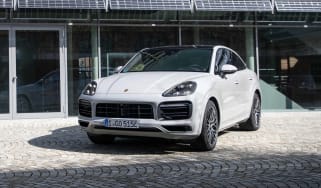 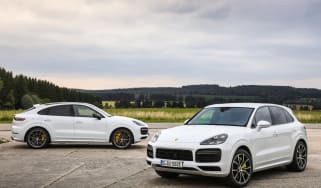 New, sportier version of the Porsche Cayenne E-Hybrid delivers 671bhp and 0-62mph in 3.8 seconds
Skip to ContentSkip to Footer