The Mitsubishi Outlander PHEV isn’t fast or entertaining, but it’s smooth and relaxing 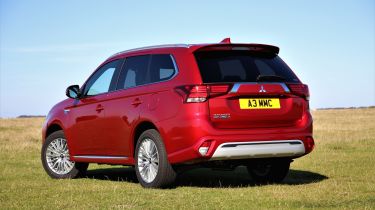 The plug-in hybrid Outlander is quiet and effortless in pure-electric mode, making for a great short-distance commuter. On faster roads or when the petrol engine is at work, the fairly underwhelming performance and light steering make for an inoffensive but forgettable experience.

The 2.4-litre petrol engine in the Outlander PHEV produces 133bhp, while the electric motors make 81bhp at the front and 94bhp at the rear. This means acceleration is smooth and fast enough, with 0-62mph taking 10.5 seconds. There’s even a Sport driving mode, although the Outlander never feels like a car that warrants it.

In electric mode around town, the lack of engine noise will be a novelty to anyone new to electric cars, and it’s one of the reasons why they’re so great for urban commuting.

Good visibility, a raised seating position, boxy proportions and light but precise steering make the PHEV well suited to pottering around town despite its chunky size, but on faster roads the powertrain feels a bit strained if you ask for an overtake.

Still, while it’s not fast, it is clever. There's a 'save' function that allows you to hold the battery charge for use when it's going to be most efficient, so you can rely on the petrol engine for the motorway part of your commute when it’ll will be at its most efficient, and then use electric power for the stop-start traffic in town.

Mind you, if it’s only a short stint on the motorway, the Outlander will do fast cruising speeds in electric mode without a problem.

You’re unlikely to want to hustle the Outlander PHEV – with light steering and ponderous body control, it certainly feels best making relaxed progress, when you can enjoy the smooth refinement.

The Outlander has permanent four-wheel-drive that’s active even when running on electricity alone, which helps it to feel stoic and secure however you’re driving it, even in wintry conditions. A MINI Countryman Cooper S E All4 is much more fun if that’s important to you.

The Mitsubishi Outlander PHEV can tow up to 1,500kg (braked), which is a way off most diesel 4x4s, but good enough to cope with a light caravan.