The Outlander is affordable to buy and run for such a spacious plug-in hybrid SUV, and it makes a lot of sense for company-car buyers 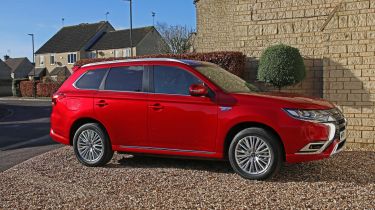 The Mitsubishi Outlander PHEV isn’t cheap compared with petrol or diesel alternatives like the Skoda Kodiaq, which starts at some £10,000 less than the cheapest plug-in Outlander.

However, it's one of the most affordable ways into a large plug-in hybrid SUV. A Volvo XC60 T8 Twin Engine is vastly more expensive, and rivals like the MINI Countryman are smaller, if also cheaper.

PCP finance is often offered interest-free, but monthly costs will start at around £400 even with a sizeable deposit, so however you look at it, the Mitsubishi is surprisingly expensive to buy for private buyers.

It’s a much more compelling proposition for company-car users; the Outlander PHEV costs half the Benefit in Kind (BiK) tax of an equivalent Skoda Kodiaq 2.0-litre diesel. The Mitsubishi benefited greatly from the 2020/21 tax changes, meaning there are huge savings to be made.

The most basic Outlander PHEV Verve model will cost a 20% tax payer around £858 per year in BiK duty. The cheapest diesel 4x4 and DSG-equipped Skoda is closer to £2,250. The differences are even greater if you're a higher rate tax payer.

Running costs for the Outlander will be seriously cheap if you charge up routinely, at which point you have a large SUV that’ll cost roughly £1-£1.50 to top up from a home charger – returning an official range of up to 28 miles.

The catch is that the Outlander will be quite expensive to fuel if you rely heavily on its petrol engine. This is a heavy car and you’ll be lucky to see 35mpg without charging, so make sure that you can plug it in regularly enough to make best use of the electric running.

Falling into insurance groups 27-31 should make the Outlander usefully cheaper to insure than a Volvo XC60 T8 Twin Engine, for instance, but also more expensive than a Skoda Kodiaq.

The Mitsubishi Outlander has a five-year/62,500-mile warranty, although there’s no mileage limit for the first two years. That’s way better than the three-year/60,000-mile warranty offered by most manufacturers, although Kia’s seven-year warranty still pips it.

You’ll need to have your Outlander PHEV serviced every year or 12,500 miles, and you can buy a fixed-price pack for around £500 to cover the first three years.

The Mitsubishi Outlander PHEV is free of tax for the first year, and will get you into London’s Congestion Charge zone for free as well. However, from the second year on it’s subject to £140-a-year VED and, if you buy one that costs more than £40,000, you’ll also pay an additional annual surcharge of £325 the first five times you tax it.