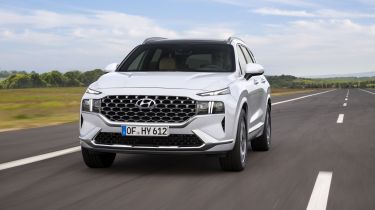 This is the new Hyundai Santa Fe SUV. Set to go on sale in European markets in September, the large family SUV will be getting both hybrid and plug-in hybrid powertrain options as part of its revamp, in similar fashion to its Kia Sorento sister model. The hybrid version will go on sale first, with the plug-in model arriving in early 2021. Prices will start at around £40,000, with deliveries of the hybrid likely at the end of 2020.

The hybrid and plug-in Santa Fe models will rival the Land Rover Discovery Sport PHEV and Mitsubishi Outlander PHEV, as well as forthcoming models such as the Nissan X-Trail and Toyota Highlander seven-seat hybrid SUVs.

Exact details of UK-specific trim levels and equipment are yet to be revealed, but Hyundai has confirmed some general details, including a list of new active safety and driver-assistance systems that will be either standard or available as options.

These include sat-nav-assisted adaptive cruise control, reverse parking collision avoidance assistance and 'Highway Driving Assist' – a system that incorporates lane-following and smart cruise control features and can be activated with a single button press. Hyundai claims that its full line-up of new safety technology puts the Santa Fe "in line with its premium competitors". 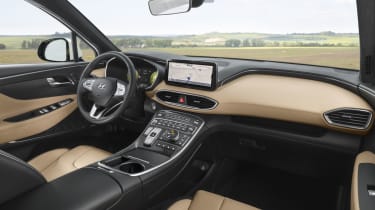 The new Santa Fe is noticeable for its wide grille, which incorporates the car's headlights. A 3D-patterned grille and T-shaped daytime running lights (DRLs) with integrated indicators complete the front-end look. A large skid plate protects the lower front air intake, while down the side the car's profile is strengthened compared to previous versions by wider wheelarch cladding.

At the rear, there's a new tail-light design, with the individual clusters connected by a red reflector band. A revised rear bumper meanwhile is said to emphasise the width and stance of the car, while all hybrid and plug-in hybrid models will come with a set of aerodynamically optimised 19-inch alloys. An optional Luxury Package can be specified to further enhance the Santa Fe's looks with 20-inch alloy wheels, as well as body-coloured bumpers and side cladding. Three new exterior colours are offered on top of the existing car's six hues: Glacier White, Taiga Brown and Lagoon Blue.

Inside, Hyundai is promising premium soft-touch materials throughout, a new 10.25-inch colour touchscreen infotainment system and a new 'floating' centre console design. Wireless Apple CarPlay and Android Auto have also been confirmed, along with smartphone mirroring and wireless charging. Voice recognition software also features, along with a head-up display, and full Hyundai LIVE online services. It's not yet clear how these features will be spread out across the range, however.

Hyundai says the Santa Fe is larger and roomier than before, with three extra centimetres of rear legroom and a larger 634-litre boot (571 litres in seven-seat versions). The car's second row of seats can be pushed forward to free up even more space. 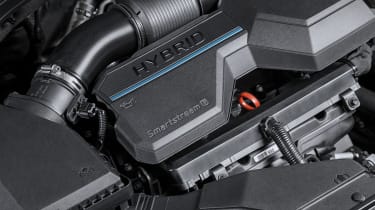 In June 2020, Hyundai confirmed that the new Santa Fe will be available with its new hybrid and plug-in hybrid engines, named 'Smartstream'. The standard hybrid will use a 1.6-litre petrol engine, a 59bhp electric motor and a small 1.49kWh battery, with power going to either the front or all four wheels depending on specification. Total power is 227bhp, with 350Nm of torque. This model will be available from launch.

The plug-in hybrid uses the same 1.6-litre petrol engine, but paired with a much larger 13.8kWh battery and a more powerful 90bhp electric motor. Together, the petrol engine and electric motor make 261bhp, with the same 350Nm torque figure of the normal hybrid, while power is fed to all four wheels.