The Mitsubishi Outlander PHEV should be reliable, and safety equipment is good – particularly on higher trim levels 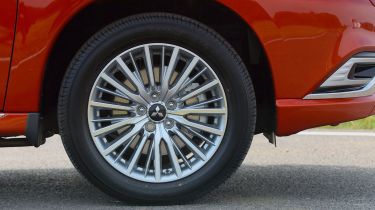 Mitsubishi has plenty of experience with electric and electrified vehicles, and good feedback from owners suggests it’ll be reliable, but it's a shame that autonomous emergency braking – where the car brakes for you if it senses an imminent collision – isn’t offered on more affordable trims.

Mitsubishi finished mid-table in the 2020 Driver Power satisfaction survey – placing 16th out of 30 manufacturers. Owners praised the maker for low running costs, practicality, and comfort, though the interiors let these cars down. Just over 12% of respondents have reported problems with their cars, which in the scheme of things is below average.

In the top 75 cars rundown, the Outlander finished a less pleasing 67th. Owners were happy with their cars' practicality, and running costs got a thumbs up, too. However, particularly low scores for infotainment and connectivity, plus ride and handling, shows where the family SUV could improve.

The PHEV was crash-tested separately to the diesel Outlander by Euro NCAP and it passed with ease, although it’s worth pointing out that the result was achieved in 2013 under less stringent criteria than now apply.

Today’s Euro NCAP test penalises cars quite heavily if they don’t have autonomous emergency braking as standard across the range, which the Outlander PHEV doesn’t – you have to go for an expensive trim level to have it. It would be better if it were at least made a standalone option on lower trims.