Practicality is somewhat affected by hybrid components, but the Outlander is still spacious 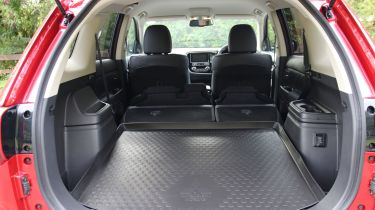 Plug-in hybrids often suffer a bit in terms of practicality, since there are batteries, an electric motor or two and a petrol or diesel engine to squeeze in. Mitsubishi has managed to do that with little compromise other than the loss of the seven-seat layout – the Outlander PHEV is five-seat only. Even so, this is about the most spacious, practical plug-in hybrid on sale.

There’s plenty of room for even a tall driver to get comfortable, and masses of legroom and headroom for adults to sit in the back. Even a middle passenger will be okay, since the relatively flat floor gives them foot room.

The Outlander PHEV doesn’t get the seven-seat option offered in the purely petrol model, due to the extra space taken up by the batteries. Aside from this, boot space actually drops by only 14 litres, so the PHEV still has a reasonable 463 litres of luggage room. For some context, a MINI Countryman plug-in hybrid has 405 litres.

The boot floor is flush with the load lip, making it easy to load heavy items, while the rear seats split 60:40 and fold flat and there's a useful cubby under the boot floor that’s perfect for storing the PHEV's charging cable. There's no room for a spare wheel, though.

The Outlander PHEV will tow a 1,500kg braked trailer, but if you’re thinking of towing horses or caravans, then the petrol version is probably a better option.