The Ford Kuga was once famed for its hatchback-like handling – the original was little more than a Focus on stilts, after all. Things went a bit fat and flabby for a while, but now the evergreen SUV has been reborn: the third-generation family car is on sale now in a variety of distinct and different flavours.

A conventional hybrid model arrives later in 2020, but for now, buyers looking to slash their tax bills and running costs will be particularly attracted to this plug-in hybrid (PHEV) version. Powered by a comparatively large 2.5-litre petrol engine and an electric motor fed by a 14.4kWh battery, the Kuga Plug-In Hybrid promises rock-bottom running costs and the ability to waft along for 35 miles on electric power alone.

Key rivals include longstanding contenders the Kia Niro PHEV and Mitsubishi Outlander PHEV, as well as the Vauxhall Grandland X Hybrid and its French sister models the Citroen C5 Hybrid and Peugeot 3008 Hybrid. The forthcoming Suzuki Across and Toyota RAV4 plug-in hybrids will also have the Kuga in their sights when they arrive in late 2020. 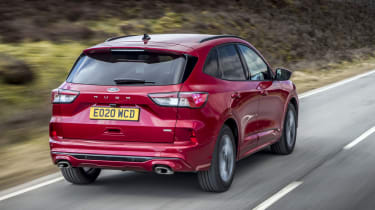 By injecting some of the original Kuga’s dynamic appeal, this latest model stands a good chance of reclaiming its crown as one of the sharpest-to-drive SUVs on sale, too. While that’s unlikely to be the driving force behind many decisions to buy one of these plug-in models, it’s nice to know that when the mood dictates, the Kuga is more than up to the task in hand.

It mixes driver fun with impressive practicality, alongside a simple-to-use and effective hybrid system – making for a solid attempt at a cheap-to-run, one-size-fits-all family car. On this evidence, it looks like Ford could soon be back at its best.

For a more detailed look at the Ford Kuga Plug-In Hybrid, read on for the rest of our in-depth review.