The Corsa-e’s boot is a good size, but it misses out on the petrol car’s underfloor storage, which leaves nowhere to put the charging cables 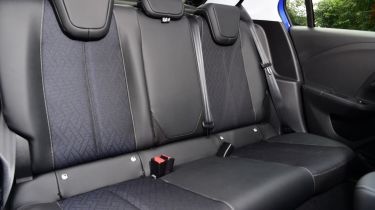 There’s very little to complain about when it comes to the Corsa-e's practicality. There’s enough room in the back for adults to sit relatively comfortably on short journeys and there’s little compromise when it comes to boot space – although you do miss out on the petrol car’s underfloor storage, which leaves you nowhere to sling the charge cable.

Even the dinky MINI Electric manages to offer that – so you’ll need to factor this in if you’re filling the boot with shopping or luggage; the last thing you want is them tangled up in the footwells, taking up valuable space in the back.

The Vauxhall Corsa-e’s conventional interior means there’s no sacrifice to be made when it comes to passenger space, storage and comfort. There’s a pair of decent-sized door bins, plus a cubby between the front seats big enough for a wallet and some keys.

There are two cupholders on the centre console, occupying space freed up by the electronic handbrake and sleek gear lever. There’s a sizable storage tray ahead of the gearlever, too, which is great for storing odds and ends like your mobile phone. 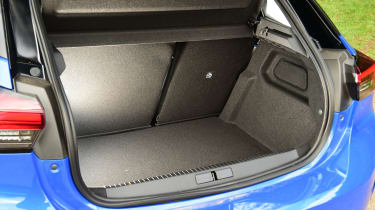 Officially, the standard Corsa’s 309-litre boot shrinks to 267 litres in this electric version. However, in reality, the Vauxhall Corsa-e boasts the same usable boot space as its petrol or diesel siblings, with one important caveat – a complete lack of underfloor storage.

This leaves you nowhere to keep the car’s charging cables, so you end up flinging them in with your shopping or leaving them tangled on the rear seat. It’s particularly frustrating, because the Corsa-e’s combustion-engined equivalents do get space under the floor; the electric version is filled with extra hardware, with the small space occupied by the bulky tyre repair kit.