The Corsa-e benefits from its Peugeot-Citroen underpinnings, which make it feel agile but easy to drive 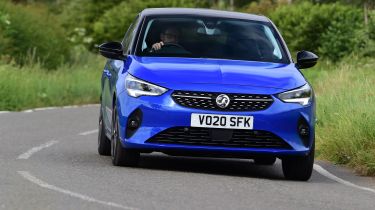 On the road, the Corsa-e, unsurprisingly, seems quite similar to its closely related sister car the Peugeot e-208. That means it drives well and feels direct and precise down a twisty road. On the downside, the 345kg battery pack represents a significant addition to the base car's weight, so the chassis and suspension are a little stiffer than on a petrol or diesel Corsa, resulting in a bouncier ride.

Like most electric cars, the Corsa-e is a peppy performer, getting from 0-62mph in 8.1 seconds and topping out at 93mph. For that level of performance, however, you need to be in Sport mode, which has the tandem effect of reducing the car's range. For day-to-day driving, it's best to stick with Normal mode, which restricts the power output to 108bhp. Eco mode turns the dial down further, to a typical petrol supermini output figure of 81bhp, in order to extract the maximum range from the battery.

That power output is most suited to the Corsa's natural habitat: urban and suburban roads, where you can make most use of the regenerative braking system to further conserve energy on the move. It takes some getting used to, but after a while you learn to anticipate when it's possible to roll off the accelerator and bring the car to a stop without using the brake pedal. Eventually, you'll end up driving like this for the vast majority of your journeys.

Like lots of small electric cars, the Corsa-e’s instant torque makes it feel particularly peppy – much more so than its petrol or diesel equivalents. It’s quite telling that in much of Vauxhall’s marketing material, it quotes the Corsa’s 0-30mph time of just 2.8 seconds – making it feel really quite quick away from the lights.

But it doesn’t stop there; the Corsa-e boasts yet more hot hatch-rivalling performance figures; 0-62mph takes 8.1 seconds – helping it keep up with most moderately quick family cars in a straight line. Things start to tail off at 70mph, but for UK commuters the Corsa’s power and performance should be more than adequate. A 93mph top speed won’t trouble the latest sports cars, but it’s sufficient for those who regularly use their car on the motorway.

By basing the Corsa on the latest Peugeot 208, Vauxhall has worked wonders for the car’s handling. While the steering is light and there isn’t much in the way of feedback, it’s precise – giving the car a predictable feel. There’s plenty of grip and body control is good given the added weight.

One downside is that slightly stiffer suspension means the Corsa-e bounces about a bit more than the petrol car. But the ride is never brittle; you rarely feel shocks reverberate around the cabin, resulting in a relatively comfortable driving experience overall.

Refinement is excellent. The silent electric motor means the only notable sound is a bit of tyre noise, although it’s pretty well suppressed – to the extent that motorway miles are no hardship. The two-stage regenerative braking system works well, too, with the ‘B’ setting providing tangible stopping power by simply stepping off the throttle. It’s more intuitive than it sounds, and with enough anticipation can offer near-one-pedal driving.