If you can stomach the high list price, the Vauxhall Corsa-e can be an incredibly cost-effective small car to run 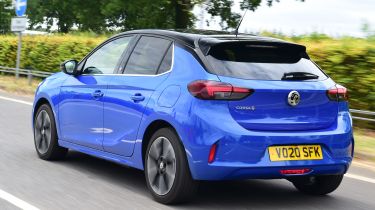 Running an electric car could work wonders for your bank balance. Yes, most cost more to buy than their petrol or diesel equivalents, but charge at home overnight on an off-peak electricity tariff and you could fill the Corsa’s battery for as little as three or four quid – far cheaper than a tank of fuel.

Then there’s the fact that there’s no road tax to pay – all electric cars are exempt from annual Vehicle Excise Duty (VED). And if you’re a company-car driver, you pay no Benefit-in-Kind tax during the 2020/21 financial year either. This rises to just 1% in 2021/22, and 2% in 2022/23, so whichever way you look at it, that’s a lot less than the equivalent petrol or diesel model would set you back.

While a group 24-25 insurance rating doesn’t seem all that high in comparison with direct rivals – the Peugeot e-208 sits in groups 26-28, for example – it’ll cost you more to cover an electric Corsa than it would one of its petrol counterparts. A top-spec, petrol-powered Vauxhall Corsa Elite Nav sits in group 17; much lower (and more affordable) than the equivalent Corsa-e.

Part of the reason for the higher cost comes down to the limited number of repair centres – both for mechanical and structural work. Fewer people are qualified to work on electric cars, which means when something goes wrong, it’s harder to get them fixed.

Like every new Vauxhall, the Corsa-e gets a three-year/60,000-mile warranty. That’s pretty much par for the course, and stacks up fairly well against mainstream rivals. In addition, every model gets an eight-year/100,000-mile battery warranty – guaranteeing against degradation of the cells. Should the battery’s usable capacity drop below 70% during that time, Vauxhall will replace it for free.

Every Vauxhall Corsa-e needs an initial service after one year or 8,000 miles, whichever comes soonest. Following this, the Corsa’s service intervals shift to every two years or 16,000 miles – again, whichever you reach first. That puts electric owners at a distinct advantage, as both the petrol and diesel versions of the Corsa require maintenance every 12 months, which inevitably raises costs – even with a pre-paid service plan.

As mentioned above, all electric cars are currently exempt from road tax (VED) in the UK, no matter their purchase price – and the Vauxhall Corsa-e is no exception.