SUVs and 4x4s are becoming more fuel-efficient these days thanks to hybrid technology. We round up some of the best you can buy right now 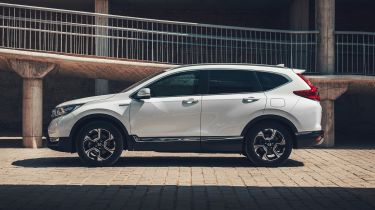 Traditionally, SUVs were considered bad news when it came to fuel economy and CO2 emissions. However, the advent of hybrid technology made big improvements possible, allowing SUV buyers to at least make a nod to eco-friendliness. And while pure-hybrids are beginning to be left behind by more efficient plug-in hybrid and pure-electric models, the technology still makes sense in many applications.

Toyota was a hybrid pioneer with its Prius family hatchback and these days the technology that debuted in that car can be found throughout the Japanese brand's range, including in its C-HR and RAV4 family SUVs, both of which appear on this list.

Other manufacturers are getting in on the act, too, though: Honda, Hyundai and Kia all have convincing hybrid family SUVs that are worth considering. This list concentrates on full hybrid (sometimes called 'self-charging' hybrid) SUVs – ones that don't need to be plugged in and combine petrol and electric power to boost efficiency, rather than plug-in hybrids, which need to be plugged in to charge and offer much greater pure-electric range.

If you're interested in the latter, check out our list of the best plug-in hybrid SUVs – otherwise read on for our rundown of the best hybrid SUVs on sale in the UK right now... 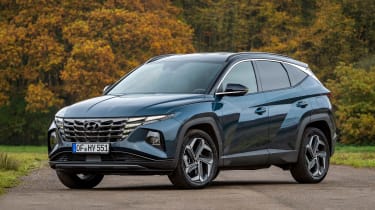 Previous to this current model, Hyundai's Tucson was a component but also pretty conservative family SUV, offering lots of space, anonymous looks and traditional petrol or diesel engines. The latest version, introduced right at the end of 2020, upends all that, bringing a striking new design language and the latest drivetrain technology underneath its sharply styled body.

A plug-in hybrid version is on the way, and even the cheaper models in the range employ mild-hybrid technology, but the full hybrid version is most relevant to this list. It employs a new 'Smartstream' 1.6-litre petrol engine paired with an electric motor and a small (1.49kWh) battery. There's 227bhp on tap, along with a six-speed automatic gearbox feeding power to all four wheels. Read our full review here. 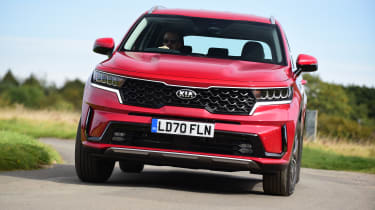 The Kia Sorento has always offered family buyers a good-value mix of interior space, engine power and practicality, but the latest version (introduced during 2020) stepped things up to become a genuine threat to premium German SUVs. As with the Hyundai Tucson, a plug-in hybrid version is in the works, and Kia still offers diesel power for those who prefer it, but the majority of sales are expected to be of the impressive full hybrid version.

As Hyundai and Kia are sister brands, the Sorento Hybrid's drivetrain is similar to the Tucson's, with a 1.6-litre petrol hybrid engine, 1.49kWh battery and electric motor. Together the engine and motor produce a maximum 227bhp and 350Nm of torque, so performance is strong despite the car's considerable weight. Four-wheel drive and a six-speed automatic gearbox are standard across the range. Read our full review here. 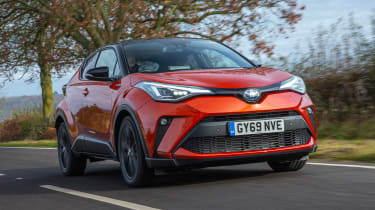 While the Toyota C-HR doesn’t boast four-wheel-drive capability, it combines the latest hybrid technology with attractive styling thanks to its raised-up body. It's available with a choice of 1.8 or 2.0-litre petrol-electric hybrid powertrains, with the non-hybrid 1.2-litre turbocharged petrol having been discontinued.

Those sharp exterior lines mean this isn't the most spacious family SUV you can buy, but it should be more than sufficient for many buyers nonetheless. On the road, the suspension treads the line nicely between fun and comfort, so the C-HR doesn’t sacrifice enjoyment or ride quality in pursuit of low running costs. Read our full review here. 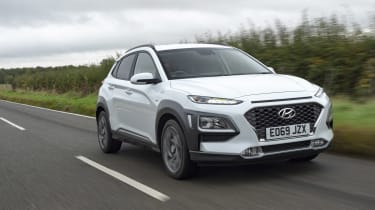 The Hyundai Kona small SUV has been offered with a wide variety of drivetrains. First there was petrol and (now discontinued) diesel. Then a fully electric version joined the range, followed by this hybrid; a plug-in hybrid is expected at some stage, too.

The Kona Hybrid shares much under the metal with its Kia Niro sister model above, but is perhaps more pleasingly styled. It has lower CO2 emissions, too, ranging from 90-99g/km, so it makes good financial sense as a company car. Ultimately, we prefer the Kona Electric, but if you want a Kona with internal-combustion power, the hybrid is the one to go for. Read our full review here. 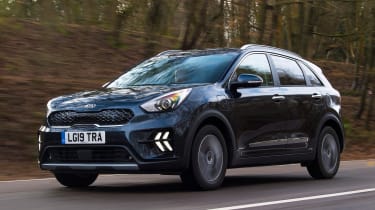 The Niro was one of Kia’s first hybrids, packing a 1.6-litre petrol engine, electric motor and battery into an SUV body in order to combine practicality with low running costs. It's not the most thrilling vehicle to look at or drive, but it still has plenty to recommend it to those who buy with their head rather than their heart.

With up to 59mpg fuel economy and CO2 emissions as low as 110g/km, the Niro should be affordable to run for both private buyers and company-car user-chooser. And when you factor in an excellent infotainment system and 427-litre boot capacity, the Niro earns its stripes as a solid and dependable hybrid SUV. Read our full review here. 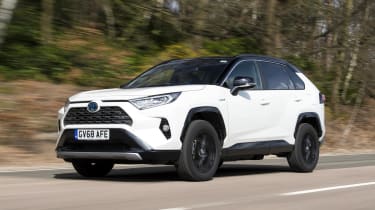 The RAV4 is a longtime rival for the CR-V above across several generations, and is now hybrid-only in the UK. As is the case with the Honda, the presence of the hybrid system rules out a seven-seat layout, so the RAV4 seats five only.

It's also more efficient around town than it is on the motorway, so will likely work out more cost-effective for lower-mileage drivers. Elsewhere, the latest RAV4 looks much more distinctive than its predecessors, with striking angular lines. Read our full review here. 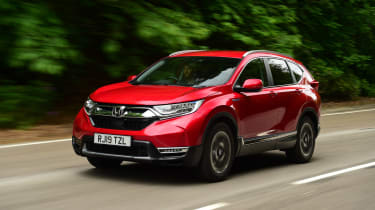 Like its Japanese rival Toyota, Honda has a long history of developing petrol-electric hybrid technology. Its latest setup is known as i-MMD, for 'Intelligent Multi-Mode Drive' and it features in the fourth-generation version of the the popular CR-V family SUV, where it makes 184bhp for a circa-nine-second 0-62mph time.All the traits that have made the CR-V a family favourite in previous generations are present and correct here: it's spacious inside, comfortable on a long journey and boasts characteristic Honda reliability.

On the downside, the addition of the hybrid system rules out the option of seven seats; for that you'll need the 1.5-litre petrol CR-V. The hybrid CR-V is also not quite as efficient as you'd hope: fuel economy only just breaks 40mpg and CO2 emissions are above 120g/km for all models. Read our full review here. 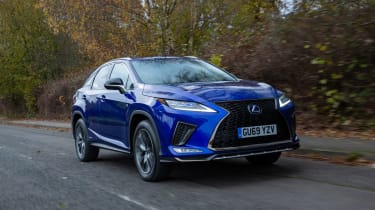 The Lexus RX comes in two forms: the standard five-seat model and the seven-seat RX L, but they use the same 3.5-litre V6 petrol engine and electric motor to make the RX a hybrid 4x4. Performance is swift enough – 0-62mph takes 7.7 seconds – but you’d never describe this as a fast car. Fuel economy is 35mpg: not great in the grand scheme of things, but not bad for a large and luxurious SUV. Quality is a given for any Lexus, and the RX is no different, while there’s plenty of advanced safety technology fitted as standard, so it’ll provide peace of mind if you’ll be transporting the family. The interior is loaded with equipment and beautifully built, but the RX’s strongest trait is its refinement and comfort on the motorway. Read our full review here.