The Volvo XC90 Recharge T8 is a plug-in hybrid with decent performance, seven-seat practicality and around 30 miles' electric running

The Volvo XC90 Recharge T8 is a fantastic plug-in hybrid SUV and was arguably the first car to successfully nail the brief in the large premium off-roader class. Like Volvo’s other Recharge models, it uses a powerful petrol engine working in conjunction with an electric motor, combining to give the XC90 almost 400bhp despite its low emissions.

There are some interesting alternatives to the XC90, though. Rivals include the Range Rover Sport P400e, Mercedes GLE 350 de and BMW X5 xDrive 45e, as well as the pure-electric Audi e-tron.

The Volvo is the only one of these that seats seven (have a look at the best seven-seat electric cars for more on that). The Lexus RX 450h L is a premium hybrid SUV that does seat seven, but while it also uses a petrol engine and electric motor, you can’t plug it in so you don't get the useful pure-electric range of the XC90.

Plug the XC90 in and you can drive up to around 30 miles on electric power alone thanks to the 11.6kWh battery and 86bhp electric motor. This supports the 2.0-litre turbocharged and supercharged petrol engine in the default 'Hybrid' driving mode, so there’s 385bhp on offer, which is enough for a 5.8-second 0-62mph time.

That means the XC90 can rival some hot hatchbacks for the 0-62mph dash, but there’s more than just speed to the Volvo’s positive traits. The car delivers its power in a predictable swell, and it's really easy to drive smoothly whether you're threading down a country road or navigating the city.

Any plug-in hybrid has to be efficient, too; we found the updated, bigger battery of the 2019 facelifted car gives it a real-world range of well over 20 miles in varied driving, or if you spend most of your time around town, you could easily eke out up to 25 miles. Do be careful of wheel size if you're anxious to get the best electric range, however: speccing the biggest alloys can reduce the range by a couple of miles.

Official fuel economy stands at a best of 101mpg, while CO2 emissions are 63 to 69g/km. Unlike pure-electric cars, the XC90 Recharge doesn’t qualify for any subsidies or grants, and at well over £65,000, it’s on the pricey side. It's best to ignore the standard claimed fuel economy figures, as they can be misleading where they factor in electric running when tested.

It's best to decide whether the XC90 will suit your needs based on whether you have easy access to a power socket at home and do mostly short journeys to make the most of the electric running, as with the petrol engine running the XC90 will only return some 25-30mpg.

There are still plenty of reasons to pick the big Volvo, though. While it's a little less practical than its petrol or diesel-engined siblings, the XC90 is one of very few seven-seat plug-in hybrids on sale, so between that, the huge boot, a decent towing capacity of 2,400kg and very respectable off-road capability, it's easily one of the most utilitarian plug-in cars you can buy, and it's a superb family car by any standard. 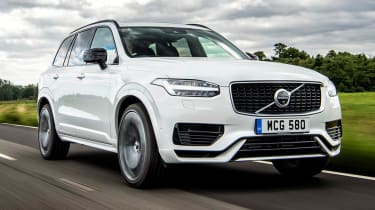 There's 276 litres of boot space even in seven-seat mode, increasing to 640 litres in five-seat form. Fold all the seats down and the Volvo is cavernous, with a total of 1,816 litres of boot room. There’s no drawback in terms of passenger space, though; it's identical to the regular XC90 thanks to clever packaging of the battery in the 'spine' of the car, while all trim levels offered with this Recharge T8 get plenty of kit.

The XC90 Recharge T8 is only offered in R Design and Inscription trims. It's easiest to think of the former as the sporty one, and the latter as the luxury one, although both have lavish levels of equipment, with cruise and climate control, a nine-inch tablet infotainment system with sat nav, a 12.3-inch digital dashboard display, heated and power-adjustable leather seats with memory function, excellent safety technology (which you can read more about later in our review) and LED headlights.

Inscription is the top trim level, with different interior trim and upgraded ambient lighting inside, while the Pro versions of both feature air suspension and a head-up display among a few other options. What is hard to forgive is that you have to pay extra for Apple CarPlay and Android Auto, but otherwise the only options you're likely to want is the £1,295 panoramic glass roof.

The charging cables can be stored in the shallow underfloor boot space, but you have to pack neatly to get them in. The alternative is to hook the cable bag to one of the four lashing eyes in the boot space, but it's annoying to have it cluttering up the boot all the time. You get a 4.5-metre three-pin cable as standard, however a 4.5-metre Type 2 cable that you'll need to access charging points costs £50 extra. On a car of this price, it should really be included.

Recharge times depend on the power supply you’re plugged into. As with the smaller XC60 that uses the same battery, a regular domestic socket will top the battery up in six hours, while a 3.6kW charger will do the same in three. There's no rapid charging with the big Volvo, (very few plug-in hybrids offer this) so even if you plug into a much faster AC public car charger (the Volvo is compatible with any Type 2 AC charger up to 22kW, but not DC rapid chargers), it'll still take three hours to charge up.

The XC90 is super-refined in electric mode, but this changes as the petrol engine kicks in; it does make an interesting and not-unpleasant supercharger whine when you work it hard, but on a steady throttle it's still a really quiet and comfortable car. It's worth adding optional air suspension it gives the XC90 a cushy, loping ride comfort even on bigger wheels.

For a more detailed look at the Volvo XC90 T8 Twin Engine, read on for the rest of our in-depth review.