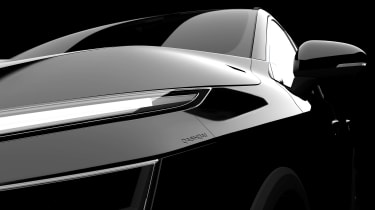 Nissan has released the first official images and details of the upcoming third-generation Qashqai family SUV, which goes on sale early in 2021. A single close-up teaser image, and a set of pictures showing a camouflaged development car testing on public roads, have been revealed.

The teaser shows that the new Qashqai will adopt the same slim running-lights design and grille shape as the latest Nissan Juke SUV, but the major news is that the big-selling model will drop purely petrol and diesel engines in favour of a line-up of petrol-electric hybrid options.

There'll be a 1.3-litre petrol engine with a choice of two power outputs and mild-hybrid technology (something that's becoming commonplace as manufacturers strive to meet ever-more stringent emissions regulations), as well as a unique full hybrid drivetrain that Nissan calls 'e-POWER'.

The latter system has already debuted on the Japanese market in models such as the Nissan Note supermini, but the new Qashqai will be the brand's first European car to get it. The e-POWER setup differs from other hybrids (such as those from Toyota and Honda), as the petrol engine doesn't directly drive the car's wheels. Instead, the wheels are driven by electric motors, which take their power from a battery pack that is itself charged up by the petrol engine.

Nissan says this will make the e-POWER drive like a pure-electric car, with the same instant torque surge from rest. The engine, meanwhile, operates within an 'optimal range' of revs per minute, which Nissan promises will maximise fuel efficiency while also keeping things quiet and providing "a natural, connected feel during acceleration".

This Qashqai will be the first Nissan to sit on a new mechanical platform, which the Japanese manufacturer calls 'CMF-C'. It promises to be both lighter and stronger than previous models and will likely underpin a wide range of models from Nissan and its sister brands in years to come. As before, it'll be possible to specify your Qashqai with either front or four-wheel drive.

Aside from its powertrain innovations, the new Qashqai will also feature the latest iteration of Nissan's 'ProPILOT' driver assistance technology. This will be capable of accelerating or braking autonomously while staying within a traffic lane and keeping a safe distance from vehicles in front, as well as coming to a stop in heavy traffic and then moving off again if the car is stopped for three seconds or less.

The system will also take account of the prevailing speed limit, as well as using sat-nav data to anticipate sharp bends. Nissan says it'll be available "from the mid-level N-Connecta grade" and above, but hasn't revealed any other details of the new Qashqai's trim levels or standard equipment.

Describing the new Qashqai, Nissan executive Gianluca de Ficchy said: "Comfort, refinement and technology will be from higher categories of car, while the driving experience will satisfy drivers and passengers alike… we feel that customers will fall in love with the feeling of an electric powertrain, without the range concerns."