A mid-life facelift has given the Toyota Prius a revised look, while an all-wheel-drive variant joins the line-up

The Toyota Prius is now in its fourth generation, and a mid-life facelift introduced in 2019 has kept the family hatchback one step ahead of its main rival, the Hyundai Ioniq Hybrid.

New for 2019 were revised headlights, tail-lights and bumpers that aim to tone down the quirky looks of the previous design. Marginal improvements to the infotainment system have eradicated some – but not all – of its most frustrating elements, while an all-wheel-drive version has been made available for the first time.

You can’t plug the Prius in, so battery recharging is dealt with by the car’s electronic 'brain'. When you lift off the accelerator or brush the brake pedal, the Prius’ electric motor works in reverse to top up the battery pack. This is known as regenerative braking. The Prius is also capable of using the engine to feed power into the battery.

There are two levels of regenerative braking: D mode gives a normal amount of braking when you lift off the accelerator pedal, just like engine braking in a normal car. Selecting B mode increases the strength of the regenerative braking, so you slow down just a little bit faster and top up the battery more intensely.

Of course, you can use the brake pedal to slow down as well – the first stage of the pedal’s travel uses the motor in reverse to slow the car; if you need to brake harder it uses the discs and calipers to slow you safely, just like any other car. This transition between regenerative and mechanical braking isn’t the smoothest, but it’s better than in almost all of its rivals.

The Prius uses a Continuously Variable Transmission, otherwise known as a CVT. It’s basically an automatic gearbox with no gears, which keeps the engine’s revs at the optimum point for the level of performance you’re asking for with the accelerator pedal.

This means that at full throttle the engine revs soar quite high, which can impact refinement, but in all other conditions the programming of this latest CVT is much better than before, giving you a better connection to the car and lessening the ‘rubber band’ surge feeling you get when you put your foot down.

It’s helped by the boost from the electric motor. There’s not much electric-only driving range – instead, think of the electric motor as an assistant to the petrol engine so it doesn’t have to work as hard, making the Prius quieter on the move. It gives you a good level of power low down, so performance around town is strong.

Meanwhile, the ride is comfortable – especially on smaller wheels. The Prius is based on the latest Toyota New Global Architecture platform, which is relatively light, even with the battery pack. As a result, the car can get away with a relatively soft suspension, so it takes nasty bumps in its stride with deft control at lower speed. At higher speeds bumps do upset the car a little more, but this is still the most engaging Prius yet.

The Toyota is surprisingly good to drive for a car focused almost entirely on fuel economy. The steering is light and precise, while lean in corners is well controlled. The 121bhp, 1.8-litre petrol-electric set-up delivers decent acceleration, especially at lower speeds.

It’s also massively practical, thanks to its 457-litre boot – this more than you'll find in many family hatchbacks, which is good when you consider the Prius also has to accommodate a small battery pack within its chassis. This is located partly under the rear seat, but there’s lots of room in the back (it’s no surprise you see many used as taxis in big cities), while the lack of a conventional transmission tunnel means it’s spacious in the front.

There are plenty of trim levels to choose from. The range starts with the Active, which gets a respectable amount of kit, including a seven-inch touchscreen, autonomous braking with pedestrian detection, automatic LED headlights and a reversing camera. It runs right up to the top-spec Excel trim, which comes loaded with kit.

The newest addition to the line-up is the Toyota Prius AWD: it's the the most expensive Prius on sale, adding another electric motor for four-wheel drive. In theory, this improves traction, but it comes at the cost of slower acceleration, less boot space and poorer fuel economy.

The price span between entry-level car and the priciest Business Edition+ with AWD is getting on for £5,000, but we’d go for the Business Edition+ without AWD, as this gets sat nav as standard. Apple CarPlay and Android Auto aren’t available (one of the Toyota infotainment system’s big failings), so the built-in navigation is worthwhile.

If it’s a non-plug-in hybrid car you’re after and practicality and efficiency are key, then we’d definitely recommend a Toyota Prius ahead of all its rivals. For a more detailed look at the car, read on for the rest of our in-depth review... 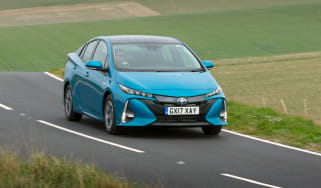 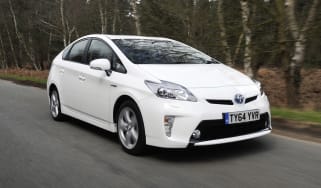 All you need to know when buying a secondhand example of the Toyota Prius hybrid (2009-2016)
New Toyota Prius 2019: facelifted hybrid gets optional four-wheel drive 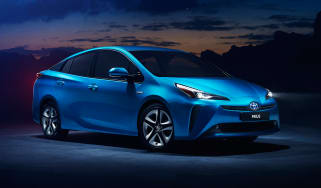 An updated version of the Toyota Prius is on sale in the UK, including with an all-wheel-drive version
Skip to ContentSkip to Footer