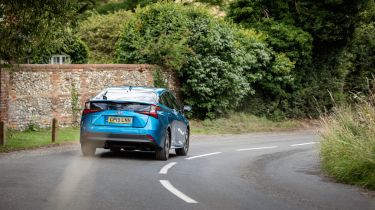 Strong fuel economy puts the Prius at the top of its class, which means you can run it on a shoestring budget. The car intelligently uses the hybrid setup itself to maximise the efficiency on offer.

With claimed fuel economy of up to 67mpg combined and CO2 emissions as low as 94g/km, the Prius is a very efficient car. Of course, these are official claims based on standardised, so won't always be reflected in real-world driving, but compared with its closest rival, the Hyundai Ioniq Hybrid, the Prius is slightly more efficient.

Bear in mind also that these figures are for the lower trim levels, which come on 15-inch wheels. These have the twin advantage of offering the best fuel economy and the best ride quality, although some buyers will prefer the look of the larger alloy wheels on higher-spec models, despite the disadvantages.

If you go for a higher-spec trim level (Business Edition+ and above) the stats aren’t quite as good. However, this doesn’t affect the group the Prius falls into for company-car tax (21% in the 2020/21 financial year) unless you buy the AWD model: with CO2 emissions of 109g/km, that attracts a BiK rating of 24%.

Our sister title Auto Express has extensively tested the Prius and found that you can expect around 58mpg in the real world, which is roughly 10mpg more than you're likely to manage in the Ioniq. So the Prius exerts its authority when it comes to economy – let’s face it, this is what hybrid cars are about.

It's worth noting that the Prius AWD isn't as strong on fuel economy as the front-wheel-drive version, with an official figure of just under 59mpg. Our test run exceeded this at a motorway cruise and in more varied driving, so the hit taken by opting for all-wheel-drive might not be as bad as it looks on paper.

With a 43-litre fuel tank, you should expect a driving range of around 550 miles. The Ioniq Hybrid has a larger, 45-litre tank, but its predicted range of 474 miles means drivers of the latter will need to stop at the pumps more regularly.