The Toyota Prius has acceptable performance and safe, secure handling, but don't expect an exciting drive 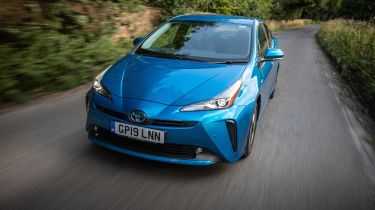 Thanks to electric assistance, performance from the Toyota Prius is sharper than you might think, if not exhilarating. What is good is that the Prius is extremely easy to drive, making long journeys relaxing with its compliant suspension setup and generally quiet running.

There's just one powertrain offered for the Toyota Prius: it consists of a 1.8-litre non-turbocharged petrol engine producing a fairly modest 97bhp, but boosted by a 71bhp electric motor that drives the front wheels along with the petrol engine, giving a total system output of 122bhp.

The electric motor’s torque helps provide a boost from a standstill, and the motor’s instant response means the Prius feels brisk pulling away. At higher speeds, the petrol engine contributes more, with the CVT automatic transmission optimising revs for the level of performance required.

Plant your right foot to the floor and the Toyota will accelerate from 0-62mph in 10.6 seconds, while top speed stands at 112mph. However, flat-out performance is not what the Prius is about. Accelerate hard and the revs rise sharply, before being held by the transmission at quite a high point, which impacts refinement.

Meanwhile, the all-wheel-drive version of the Prius uses the same powertrain as the standard car, but adds a 7bhp electric motor to the rear axle. This increases the car's 0-62mph figure to 10.9 seconds, but is designed to deliver smoother traction in the process.

How does it manage this? At speeds of up to 6mph, the rear motor is always engaged, helping to take the strain off the engine. The second motor can also engage between 6 and 44mph, but only if it senses that one or more of the wheels is losing grip. Beyond 44mph, the Prius AWD reverts to a front-wheel-drive setup only.

In any case, the Prius offers a pleasant way to cruise at all speeds, and is at its best when driven at a leisurely pace. The car will carry plenty of speed through corners, but it's far from satisfying to drive.

The Prius’s steering is light and reasonably precise, and with double-wishbone suspension, the Prius changes direction positively and offers plenty of support and body control in turns without upsetting the ride quality.

At speed, the car feels as though it floats over most road surfaces with a relatively light, compliant touch. Only big bumps really upset the body and cause a thunk through the suspension. The setup is at its most forgiving on 15-inch wheels.

This softer, more compliant side to the Prius' ride comes into its own around town, where grids, potholes and other lumps and bumps are prominent. However, while you don’t feel bumps all too badly, you do feel quite a fair bit of suspension and road noise as the car smothers bumps beneath you.

This means the Toyota isn't as quiet as it could be, especially at high speed. If you ask for full throttle, that naturally aspirated engine revs hard, filling the interior with a coarse engine note. However, at low speed it’s fine, and from walking pace on electric power the Prius is extremely relaxing, as a hybrid car should be.