The Toyota Prius is comfortable and has a spacious interior, but the infotainment could be better 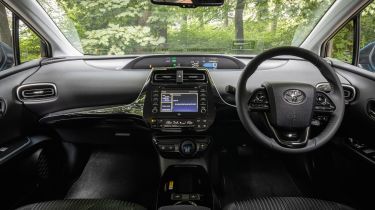 While the Toyota Prius’s exterior styling might not be to all tastes (2019's mid-life facelift has been designed to make it less divisive in this department) it does at least mean there’s plenty of space inside for passengers.

It doesn’t feel cramped inside and, combined with that pliant ride mentioned, offers a decent level of comfort. The interior technology leaves a little to be desired, though.

Given the Toyota Prius’s petrol-electric engine, you might rightly expect some interesting technology inside, and while there’s a reasonable level of gadgetry, the way it’s executed leaves a lot to be desired. Take the car’s centrally mounted instruments, for example. This has become a Prius trademark and was evolved a step further for this latest version.

The 4.2-inch digital display in the centre of the dashboard gives speed information and engine revs, and you can change the display to show different readouts. One of these gives an overview of where your power is coming from (electric motor and/or petrol engine) as well as the flow of energy when you lift off or brake.

It also shows the state of the battery pack’s charge, and while this gives you plenty of data to help drive the car efficiently, the screen resolution could be sharper, as it looks a little low-resolution and therefore old-fashioned next to more modern rivals.

Step up to Business Edition and you also get wireless mobile-phone charging, a head-up display and heated seats, while Business Edition+ adds sat nav, front and rear parking sensors, automatic parking and 17-inch alloy wheels. Business Edition+ is the only trim available in all-wheel-drive form.

Finally, top-spec Excel cars get leather upholstery, a JBL 10-speaker stereo and wi-fi hotspot capability. The specifications are good then, but the Prius lets the side down when you focus on the infotainment and its connectivity. 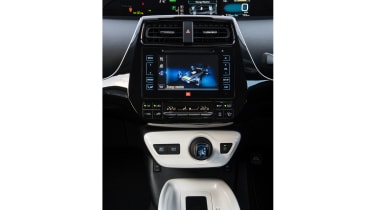 The problem of poor graphics affects the seven-inch central touchscreen as well. The resolution is poor and means the Prius loses ground on infotainment compared to the much more advanced Hyundai Ioniq Hybrid setup.

Apple CarPlay and Android Auto aren’t available even as options, so smartphone connectivity is limited – and the Ioniq gets these features as standard. It means the only way you’ll be able to link you smartphone to your car is through Bluetooth for audio streaming and calls.

There aren’t really any useful apps and the infotainment system itself isn’t the easiest to use, although the recent facelift has alleviated some of the more frustrating aspects. For example, you can now use pinch-and-swipe movements, making the system a little more intuitive. Steering-wheel-mounted controls allow you to raise and lower the volume of the speakers easily, although the rest of the buttons on the dashboard itself feel cheap and flimsy.

There's an even bigger problem with the screen, too: because it's so low down, using it in any capacity is a distraction while you're on the move. It's often slow to respond to finger inputs, and it's angled in such a way that it often picks up a significant amount of glare from the sun. Despite the small improvements introduced with the facelift, it remains the Prius' biggest shortcoming.