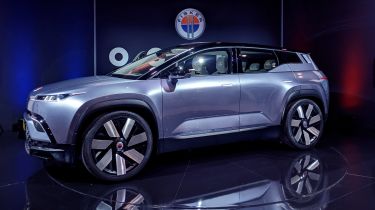 The new Fisker Ocean electric SUV has made its public debut at the Consumer Electronics Show (CES) in Las Vegas. The manufacturer has also revealed a range of purchase and lease options for the vehicle, which should be in customer hands by early 2022.

Key features of the Ocean include a solar roof, which Fisker says will power the car for around 1,000 miles of driving in the course of a year, as well as recycled carpeting, 'eco-suede' upholstery, a vegan interior and reuse of rubber waste from tyre manufacturing in its construction.

The 4.6-metre-long SUV sits on 22-inch alloy wheels, with a pair of electric motors – one at the front and one at the rear – giving it four-wheel drive, suggesting a degree of off-road capability and ample towing capacity. Claimed range is 250 to 300 miles and the car also boasts wireless charging capability.

In place of a grille, the Fisker Ocean has a centrally mounted radar unit behind a glass panel on its nose, to support its driver-assistance and crash-avoidance systems. Inside, there's a large head-up display, along with a "unique, intuitive user interface" to control the car's systems.

A key feature of the Ocean is something Fisker calls 'California Mode', which lowers or slides aside nine glass windows or panels to open the entire cabin with one touch. This creates an open-air feeling, while still maintaining a full safety structure around the passengers.

Rather than appointing dealers, Fisker will sell the Ocean directly to consumers, in the mould of fellow US electric-car brand Tesla. Reservations opened in November 2019, with deposits of $250 being taken through the app or Fisker Automotive’s website.

The Ocean can be purchased outright starting from $37,499 (approximately £28,500 at the time of writing), but Fisker is also offering leasing options. These start from $379 (approximately £290) per month and can run for a month, eight months, 22 months or several years. 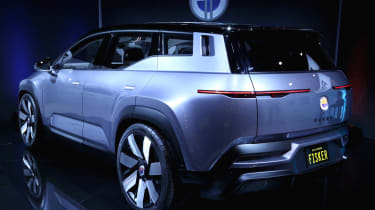 The brand says five different option packages are available to be ordered at launch, and these will be on display in Fisker 'experience centres' from some point in 2020.

Late in 2019, Fisker announced a partnership with Electrify America, a rapid-charging network that’s set to have 35,000 charging points in operation across 800 stations in 45 US states by 2021. Electrify America’s CCS chargers can deliver up to 350kW, with Fisker claiming a 200-mile top-up of the Ocean’s 80kWh will take just 30 minutes.

Production of the Ocean is set to begin in late 2021, with deliveries to customers starting in 2022. In addition to the Ocean, Fisker is planning two more "mass-market" electric cars. It has said that its previously announced Fisker EMotion luxury saloon "will now be introduced to the market after an affordable model becomes available".