Want to switch to hybrid motoring, but prefer secondhand rather than brand-new? Our rundown of the very best used hybrid cars can help 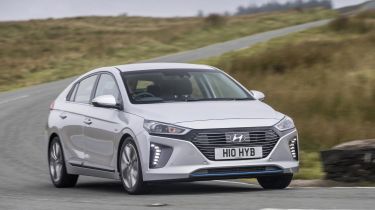 Hybrid cars – those that use a combustion engine and electric motor together and can charge their own batteries – are a common sight on UK roads, not least because of their low tax rates, decent fuel economy and easy-driving nature.

While most mainstream manufacturers have turned their attention to producing more efficient plug-in hybrid models, a select few have stuck to their hybrid roots. Toyota and its subsidiary Lexus are the most prolific, so there are always plenty of secondhand options available.

Toyota may be the leader when it comes to hybrid technology, but there are plenty of options from other manufacturers too, regardless of budget or requirements. Superminis, saloons, hatchbacks and SUVs are all available with full hybrid drivetrains that make a lot of sense for urban living or just cutting down on running costs.

This list covers 'full hybrid' cars, sometimes also known as 'self-charging' hybrids (particularly by Toyota and Lexus, but also Kia and some others). If you're in the market for a secondhand plug-in hybrid car (with more than few miles' electric range, and that you can plug in to recharge), have a look at our roundup of the best used plug-ins you can buy right now, while we also have a list of the best used electric cars to check out. 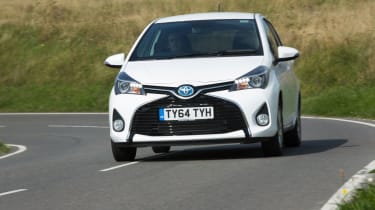 One of the few small cars to use a full hybrid drivetrain, the Yaris is a great choice for those after a cheap-to-run supermini. The car uses a similar layout to its larger siblings elsewhere on this list, albeit with scaled-down components. The Yaris uses a 1.5-litre petrol engine and a smaller electric motor with a combination of 98bhp. With a revised model on the way, now is the time to grab a deal on the outgoing car.

The best reason to pick the Yaris over its conventionally powered competitors on the used market is running costs – 91.2mpg is claimed for smaller-wheeled models, while 75g/km CO2 emissions are good news when it comes to road tax and exemption from the London Congestion Charge until October 2021. 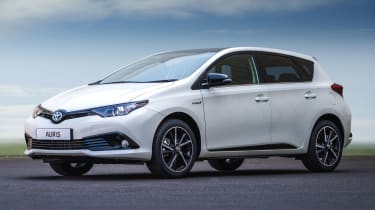 Ask most people to name a hybrid car, and they'll probably say 'Toyota Prius'. What some people don't know, however, is that the Prius' 1.8-litre petrol-electric drivetrain was also offered in the more conventional-looking Auris hatchback and estate (until it was replaced by the hybrid Corolla hatchback and Corolla Touring Sports estate in 2019).

It's far from the most exciting car out there, but a used Auris is still a very sensible buy. Toyota's record for customer satisfaction and reliability is very good, so this car should give you many miles of efficient and dependable motoring – even if it's not going to thrill you on a twisty road. Read our full used buying guide for the Mk2 Auris hybrid here. 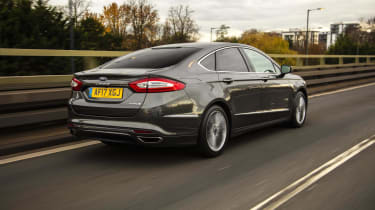 The Ford Mondeo has always been a great-value secondhand choice, and with a hybrid version having been available since 2014, you can now choose one of these used, too. Unfortunately, it wasn't a big seller, so there isn't a massive choice and you may have to travel a bit to find one. Fuel economy isn't hugely impressive compared to other hybrids, either, but this is still a well equipped and spacious family car offering decent performance and good reliability.

Around £12,000 will secure a high-mileage 2014 or 2015 example, with newer and lower-mileage cars nudging £15,000. If you look really hard, you may find the luxurious and high-spec Mondeo Vignale Hybrid for just under £20,000 – a significant saving from its brand-new price. Read our full Mondeo Hybrid review here. 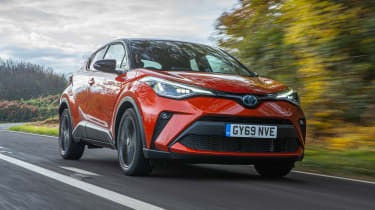 It’s impossible to compile a list of non-plug-in hybrids without including a large number of Toyotas. The Japanese manufacturer was a pioneer of what it calls ‘self-charging’ hybrids and has used the technology across its range. The C-HR is a stylish small family SUV that benefits from this technology. It’s a newer model, but early cars from 2017 are now dipping to around £14,000.

Using the same powertrain as the Auris and Prius featured on this list, the C-HR offers similar performance, but is a little sharper to drive, all the while offering decent economy and a pleasant driving experience. A 2.0-litre version is also available, which boosts performance but sacrifices some efficiency in the process. Still, if you want a small SUV that looks good and is great to drive, the C-HR makes a lot of sense as a used buy. Read our full review here. 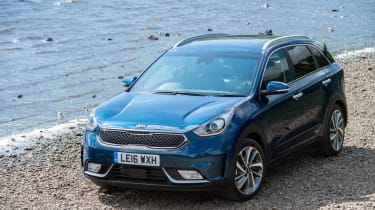 The Kia Niro has made hybrid family motoring a reality by offering efficient petrol-electric power in a practical SUV package. As it has only been around a few years, it's far from the most affordable used hybrid model you can buy right now, but strong sales should ensure a healthy secondhand supply in years to come.

The cheapest cars start from around £17,000, offering the excellent standard equipment typical of Kias, as well as the balance of the company's famous seven-year/100,000-mile warranty for ultimate peace of mind. Read our full review here. 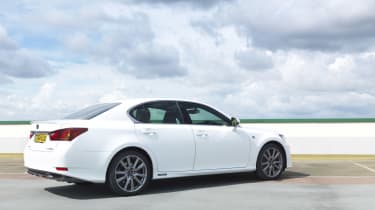 Lexus has long been a proponent of hybrid technology and this generation of GS took on the BMW 5 Series, Mercedes E-Class, Jaguar XF and Audi A6 from 2012 until 2018, when it was replaced by the Lexus ES. The GS attempted to take on the Europeans at their own game, especially in performance-orientated F Sport guise, but couldn't ever really match them for driving involvement and enjoyment.

It remains a reliable, comfortable and well equipped choice on the used market, however, with its lack of desirability meaning it's now available for a lot less money than its contemporaries. Read our full used buying guide for this generation of the GS here. 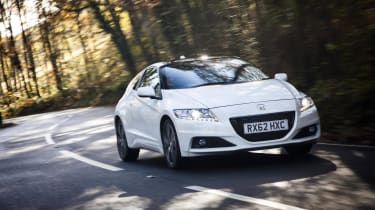 The Honda CR-Z raised high hopes among enthusiasts when it debuted in 2010, recalling as it did the much loved Honda CR-X coupe of the 80s and 90s. But while the CR-Z looked smart, handled neatly and drove well, its petrol-electric hybrid engine didn't really deliver enough power to make it a true enthusiasts' car.

It's at its most economical around town, so if you don't regularly need to carry passengers in the back, the CR-Z makes an interesting alternative to a Jazz or Civic of similar vintage. The cheapest CR-Zs are now available for less than £5,000, with around £8,000 getting a clean, low-mileage example in desirable GT spec. Read our full CR-Z used buyer's guide here. 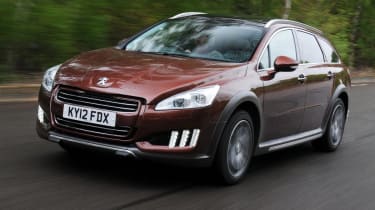 It’s a leftfield choice in this company and you’ll be lucky to find more than a couple of examples for sale at any one time, but the 508 RXH HYbrid4 is a great-value choice for those looking for a practical family car. You can secure a low-mileage example with buckets of standard equipment for well under £10,000.

It’s the only diesel-electric hybrid on the list, using a 2.0-litre engine and an electric motor to give four-wheel-drive capability. It’s not the best car of its kind to drive – nor can it match the appeal and panache of the current 508 – but provides a great combination of long-distance comfort and smooth progress around town. If you like the idea of a cut-price, luxurious, diesel-electric estate that’s got a bit of SUV character, this is your only choice. 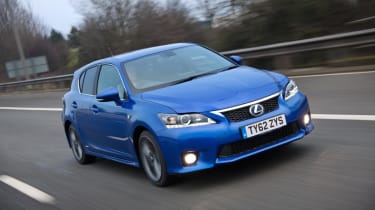 The CT takes Lexus parent company Toyota's renowned petrol-electric hybrid technology from the Prius and wraps it in a more upmarket and luxurious package to create the Lexus CT. The hybrid hatchback has sold reasonably well since its arrival in 2011 and has been updated several times to keep it up to date; production eventually ended in 2020.

Standard equipment and seat comfort are good, although the CT is uninvolving to drive and ride quality can be poor on UK roads. Prices start at a little over £6,000 for early examples, rising to well over £30,000 for highly specced nearly-new cars, so there's something for almost any budget. Read our full CT used buyer's guide here. 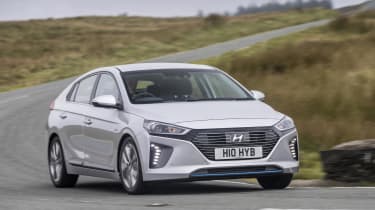 Toyota's Prius had things its own way in the hybrid family hatchback class for many years, until the similarly shaped and sized Hyundai Ioniq arrived in 2017 to shake up the market. Somewhat dowdy interior and exterior looks mean the Ioniq isn't really a head-turner, nor will it stir your soul while driving, but it's a solid, sensible, efficient and great-value choice for everyday motoring.

Used examples currently start at just under £15,000 for 2017 cars with reasonable mileage, and Hyundai's warranty is generous, too, running for unlimited mileage up to five years. Read our full review here. 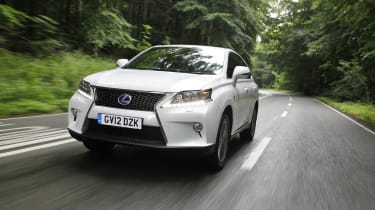 Lexus' largest model was a hybrid pioneer, offering petrol-electric drive in a luxury family SUV as early as the second-generation model in 2005. Today, these early cars can be picked up for well below the £5,000 mark, which is incredible value for a large and luxuriously appointed hybrid SUV. Excellent reliability means even age and high mileage shouldn't put you off, as long as the car has a good service history. 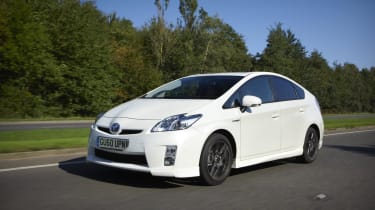 The original hybrid, and still the first one that comes to mind when you mention the word, the Toyota Prius is now into its fourth generation. On the used market, this third-generation model (2009-2015) is perhaps the most interesting prospect, due to the huge number of cars available at a wide range of price points.

Prices range from about £6,000 for (sometimes very) high-mileage early cars up to around £17,000 for a low-mileage 'approved used' 2015 example from a main Toyota dealer. All get you Toyota's efficient and very reliable 1.8-litre petrol-electric drivetrain, decent standard kit and a spacious interior and boot. Read our full Prius used buyer's guide here. 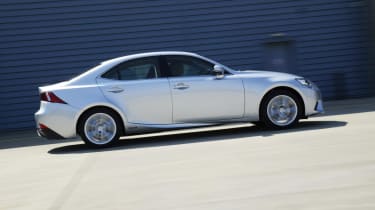 The latest swoopy incarnation of Lexus' BMW 3 Series-rivalling IS hit UK showrooms in late 2013 and almost all examples sold were the IS 300 hybrid version, so there are plenty of well-looked-after ex-company cars to choose from on the market. Sleek looks, generous standard equipment and decent fuel economy all count in the IS' favour; a slightly cramped interior and lacklustre driving experience let it down a bit, however. Production stopped in 2020.

But if you're after value in this part of the market, it's worth checking out. The cheapest early examples sit at around £11,000, good, lower-mileage cars go for around £15,000 and fully manufacturer approved examples start from not much more. Read our full review here.