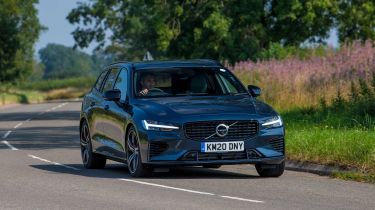 The V60 hybrid has the potential to be one of the biggest-selling of the lot. As a fairly large and relatively expensive plug-in hybrid, one of its key target markets is the company-car sector, where rivals like the Volkswagen Passat GTE, BMW 330e and Mercedes C-Class hybrid all battle for customers.

Sporting the regular V60's sophisticated styling, the hybrid offers a choice of T6 and T8 powertrains. The former pairs a 250bhp 2.0-litre turbocharged and supercharged petrol engine with an 86bhp electric motor for a total output of 335bhp. The petrol engine drives the front wheels while the electric motor works on the rears. An eight-speed automatic gearbox is standard.

The standard 385bhp T8 was dropped in early 2020, which means the T8 now comes exclusively in 'Polestar Engineered' trim. Using the same 2.0-litre turbocharged and supercharged petrol engine as the T6, here it makes 314bhp. The 86bhp electric motor is unchanged, combining for a total output of 399bhp.

Battery capacity for both cars is 11.6kWh, and the customary set of plug-in hybrid driving modes is offered, letting you choose between using solely battery power, conserving the battery and prioritising the engine, or combining the two in either the most efficient or most powerful way. The latter will see the car accelerate from 0-62mph in a tenth less than five seconds (T8 Polestar Engineered), while more gentle driving could see you cover over 30 miles in zero-emissions, fully electric mode.

Making full use of that electric mode will get you close to the claimed fuel-economy figure, but the more you use the petrol engine, the faster it'll drop. However you drive the V60, though, its CO2 emissions of 41-56g/km (depending on the exact specification) keep company-car costs to a minimum and ensure exemption from the London Congestion Charge until October 2021.

From behind the wheel, the V60 isn't as involving as a BMW 3 Series, feeling a bit out of sorts when driven aggressively. That said, most people will be perfectly happy with its safe and predictable handling – especially if you place particular value on comfort and refinement.

Volvo offers the V60 hybrid in just three trim levels: R-Design, Inscription and Polestar Engineered – with the latter getting a small power boost compared to the regular car, as well as some extra kit.

Standard equipment for R-Design cars includes 18-inch diamond-cut alloys, part-leather sports seats, lowered suspension and gearshift paddles. There's even a crystal gearshifter, which may be a bit ostentatious for some tastes. If you want either the cheaper Momentum trim level, you have to go back to a petrol or diesel V60, however.

Whichever trim level you choose, you're unlikely to be disappointed with the V60's interior, which boasts classy Scandinavian design throughout, along with typically comfortable Volvo seats. The hybrid's luggage capacity is the same as the regular V60's, too, thanks to the battery pack being located in the centre of the car rather than under the boot floor.

Overall, the V60 is another impressive addition to Volvo's strong line-up of 'Recharge' plug-in hybrid models. The standard version is the one to go for, with the Polestar Engineered not really worth the extra cash, as this car isn't capable of BMW-like driving thrills even with extra horsepower. And yet the hybrid V60 is likely to offer plenty of appeal for many buyers nonetheless.

For a more detailed look at the Volvo V60 Recharge, read on for the rest of our in-depth review.