There are some interesting alternatives to the XC60, though. It's a mid-size premium SUV with five seats, and there aren’t many direct rivals with plug-in drivetrains just yet, but the competition consists of the Mitsubishi Outlander PHEV, among others.

That car isn't as upmarket, but also uses a petrol motor and electrification to deliver economy. It’s also a little larger but cheaper than the Volvo XC60 hybrid. More premium rivals for the Volvo are the BMW X3 and Mercedes GLC plug-in hybrids, badged xDrive30e and 300e 4MATIC respectively. Both are on sale now but deliveries won't start until later in 2020.

Elsewhere, the Lexus RX 450h is a premium five-seat SUV that also uses a petrol engine (a V6 here) and electric motor, but unlike the cars above, the Lexus isn’t a plug-in. The Japanese company calls it a ‘self-charging’ hybrid, which means the car uses the engine or energy recouped from the brakes to top up the battery – but it's not as efficient.

With the Volvo you can plug in. Do so and the Swedish brand reckons you can travel up to 32 miles on electric power alone, thanks to the 11.6kWh lithium-ion battery supplies an electric motor. In combination with the 2.0-litre turbocharged and supercharged petrol engine, there’s an impressive 340bhp on offer from the T6, 390bhp from the T8 and 405bhp from the special-edition T8 Polestar Engineered version.

That's enough to rival some serious hot hatchbacks, but there’s more than just straight-line speed on offer. The way the XC60 delivers its power, in a smooth, electrically assisted surge, means there’s always plenty of performance for making effortless progress. 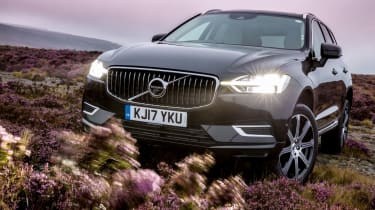 Of course, a plug-in car has to be efficient, too, regardless of whether it’s an SUV or serves up strong performance. According to the official claims, the XC60 Recharge absolutely is. Official fuel economy is between 86 and 113mpg, while CO2 emissions are 73g/km at most, which means the Volvo is exempt from the London Congestion Charge until October 2021.

It’s a little less practical than its regular petrol or diesel-engined siblings, but with a 468-litre boot with the rear seats in place, not by much. There’s no drawback inside, as interior space is identical to the regular XC60, while all trim levels available as a Recharge hybrid get plenty of kit.

The charging cables are stored in the boot, and you get a 4.5-metre long three-pin cable as standard. A 4.5-metre Type 2 cable for use with public chargers or a home wallbox is a £50 extra. The XC60's onboard charger limits its maximum charging speed to 3.7kW, however, so the best time you'll see to fully recharge the battery is a little over three hours, regardless of what you're plugged into.

The XC60 is very quiet when driven in electric mode, as there’s barely any noise from the motor and wind and tyre roar are well suppressed. This changes as the petrol engine kicks in, as it’s vocal when revved, but at least the car is comfortable.

On air suspension especially, the ride is absorbent, and you feel the fluidity that the sophisticated setup gives. Even the entry-level trim rides on fairly big wheels, so cracked tarmac and violent bumps do upset the body, but most of the time the XC60 is serene.

For a more detailed look at the Volvo XC60 Recharge, read on for the rest of our in-depth review.