The Volvo V60 Recharge is generally spacious inside, and both luggage and storage space are good 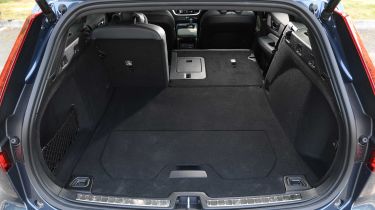 Volvo estates have long been a byword for practicality and the V60 certainly doesn't disgrace itself in this regard. Only slightly tight knee and foot room for rear-seat passengers count against it, but otherwise it's so spacious you'll wonder why anyone would need the even larger V90 model.

For the time being it has the upper hand against its main rival – the BMW 3 Series plug-in hybrid – as the estate-bodied version of that car isn't yet on sale. That will change by the end of 2020, however, when BMW adds a practical 330e Touring to its range.

Occupants should have few complaints about space inside the V60 hybrid, with a six-foot passenger being able to sit behind a six-foot driver with no issues. Head and legroom in the back are fine, but feet can feel a little squeezed if the front seats are in their lowest position.

The transmission tunnel is also quite large, which can impact on passengers in the left and right rear seats as well as its obvious effect on anyone in the middle seat. Storage-wise, there's plenty of space to put your stuff, with a decent-sized glovebox, a large cubbyhole between the front seats and big doorbins all round.

With all seats in place, the V60 Recharge will swallow 529 litres of luggage – increasing to 1,441 litres if you drop the seats flat. Better still, thanks to some clever packaging, there's no compromise to be made by opting for this hybrid version – the Recharge hybrid gets the same boot as the standard petrol and diesel cars.

Perhaps frustratingly, however, if you want to charge while out and about, you'll need to make space for the cable storage bag. This keeps the wires neat and tidy, but takes up valuable room in the boot.