There's no shortage of power; the Volvo V60 Recharge T6 makes much more sense than the flagship Polestar car 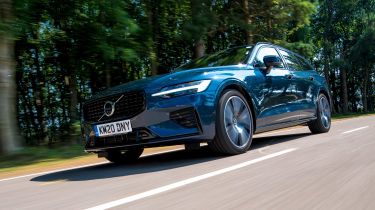 The standard V60 T8 'Twin Engine' model was dropped in early 2020 in favour of a less powerful V60 T6 variant. Although not a full-on high-performance estate in the mold of the old Volvo V60 Polestar or the Mercedes-AMG C63, the hybrid Volvo V60 still has a hefty power output in standard form; 335bhp should be more than enough punch for most buyers.

This figure is boosted to nearly 400bhp by the 'Polestar Engineered' version. That puts it in contention with purely petrol-powered rivals like the Mercedes-AMG C43, Audi S4 and BMW M340i. But unfortunately it's not as convincing and all-round package as any one of that trio.

Its rakish, sporty styling hints at significant performance and handling potential, but unfortunately this promise isn't fully delivered on once you get behind the wheel. This is an undoubtedly fast car, but lacks the last degree of handling sharpness and finesse necessary to truly appeal to keen drivers.

Speed is the name of the game here, with 0-62mph taking less than six seconds, even in the standard T6 version. Not all that long ago, this was approaching supercar acceleration territory, but it demonstrates the potential of electric and petrol power combined. The Polestar Engineered version shaves almost a second off the 0-62mph time, slashing from 5.4 to 4.6 seconds.

The thing is, very few buyers will need such a powerful plug-in hybrid. For most, the 'entry-level' 335bhp V60 T6 will offer all the power and performance they'll ever need. There's plenty of punch courtesy of a sizeable electric motor, resulting in strong, linear acceleration.

Volvo recently announced plans to govern all of its cars with an electronic limiter – meaning the V60's top speed (along with every other new or updated Volvo) is restricted to 112mph across the board. If you find an earlier V60 T8 model, you'll find it electronically limited to 155mph – regardless of whether you'll make use of that increase, it's a sizeable difference whichever way you look at it.

On the move, the V60's automatic transmission can be slightly hesitant in delivering a burst of power from the engine when you request it, although as set out above, there's certainly nothing to complain about the rate of acceleration when it does arrive.

Bear in mind in early 2020, the standard V60 T8 was replaced by the less-powerful T6. However, aside from slightly slower acceleration (it's still fast, don't worry) the two cars feel very similar. Those after a sportier take on the formula should look to the T8 'Polestar Engineered' variant, which reinstates that power hike, along with a variety of performance parts.

The V60 handles tidily enough, but it never fully delivers on its promise of sharp handling. Even with the flagship Polestar model's chassis upgrades, the V60 is still no match for a rear-wheel-drive BMW 3 Series when it comes to driving enjoyment. Despite the Polestar's slightly sharper steering, the not-insignificant weight of the hybrid drivetrain makes itself felt and prevents the car from being as agile and responsive as its rivals.

And in comparison to its more comfortable V90 hybrid bigger brother, it's more easily unsettled by rough roads. It's still an accomplished cruiser, however, proving well cushioned and comfortable at high speeds – with excellent refinement, too.

The Polestar Engineered gets Ohlins adjustable dampers – something more commonly seen on a track-focused performance car than a family-orientated estate. While these can be used to soften up the ride a bit, it's a complex manual process that, in the case of the rear suspension, involves jacking the car up – something most owners probably won't have the patience for.