Company-car drivers will be quids-in with a Volvo V60 Recharge, but it won't be cheap to insure 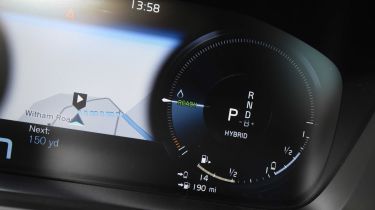 Low CO2 emissions of 41g/km (rising to 50-56g/km for the Polestar Engineered version) are key to the V60 hybrid's status as an enticingly affordable company car. It's in a much lower BiK (Benefit-on-Kind) band than its purely petrol or diesel-engined siblings, so if it's on your company-car list, it's an obvious choice.

Daily running costs can also be very low if you make the most of the car's electric range, but on the other hand you will pay servicing and insurance rates commensurate with Volvo's premium-brand status.

The V60 Recharge T6 is in group 42, while the V60 Recharge T8 Polestar Engineered is one higher – 43. They won't be especially cheap to insure compared to rivals – a BMW 330e is in group 33, for example. That said, for a car with as much as 399bhp, insuring the Volvo could be far worse.

Volvo's standard warranty covers the car for three years or 60,000 miles – on par with premium rivals, but mainstream manufacturers such as Toyota, Hyundai and Kia do better, with longer durations and more generous mileage caps.

Volvo recommends the V60 Recharge be maintained once a year, or every 18,000 miles – whichever comes up sooner. The cost of servicing is set by individual Volvo dealers, so it may pay to shop around if there's more than one in easy reach.