As the most direct Tesla Model 3 rival yet, the Polestar 2 strikes a great balance between practicality and desirability

While this Volvo spinoff brand's first effort was the rakish, limited-run, luxurious Polestar 1 plug-in hybrid, the Polestar 2 is a different proposition – and one that has its sights fixed firmly on the all-conquering Tesla Model 3. While the Polestar 1 was a great way for the brand to introduce itself, the Polestar 2 is the car that the Swedish company hopes will see it break into the mainstream.

Unlike the Polestar 1 before it, which was a plug-in hybrid, the Polestar 2 is fully electric, with power from a 78kWh battery being sent to two electric motors, one for each axle. There's 402bhp on tap and performance is fittingly exhilarating – 0-62mph takes less than five seconds.

Polestar bills the 2 as a ‘four-door all-electric fastback’, but to our eyes it's more of a coupe-SUV like the Jaguar I-Pace. It shares some design cues with its Volvo siblings and is built on some of the same architecture; some parts are shared with the Volvo XC40, for example. 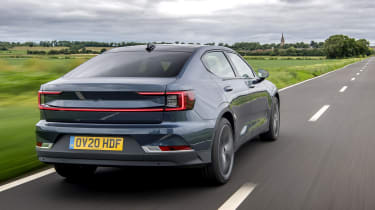 The Polestar 2 is aimed directly at Tesla customers, offering a similarly appealing blend of style, performance and sophisticated in-car technology. It certainly looks the part – the Polestar 2 is just as sharply styled as the 1, but betrays its Volvo roots a little less. There are no trim levels as such, just a series of option packs – a streamlined, minimalist approach similar to Tesla’s.

Our first test car included the Performance Pack – a £5,000 option that adds 20-inch alloy wheels, Brembo brakes and manually adjustable Ohlins dampers, as found on 'Polestar Engineered' versions of Volvo models such as the S60 saloon and XC60 SUV. This sharpens up the car's responses, but does result in a slightly lumpen ride quality for what is otherwise a fairly comfortable family crossover.

As it stands, we like the Polestar 2 a lot – it’s a genuinely desirable electric car with a useful range, slick infotainment, thumping performance and great build quality, along with a certain cool factor that’s sure to help it fly out of showrooms. Taller passengers may feel cramped in the rear seats and the Tesla Model 3 has a bigger boot, but these are small blots on an otherwise clean copybook.

For a more detailed look at the Polestar 2, read on for the rest of our in-depth review...

Polestar 2 recall: over 4,500 models recalled due to power failure issue 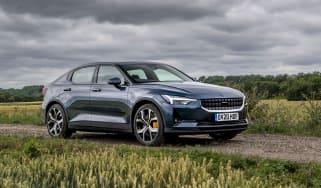 Polestar 2 recall: over 4,500 models recalled due to power failure issue 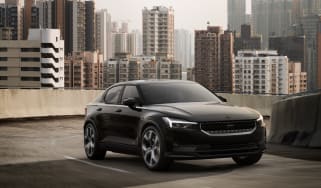 Orders are now open for the Polestar 2 electric SUV; all customers to get Plugsurfing access
Skip to ContentSkip to Footer