It's spacious and comfortable enough for most families, but the Polestar 2's sloping roof does hinder practicality a little 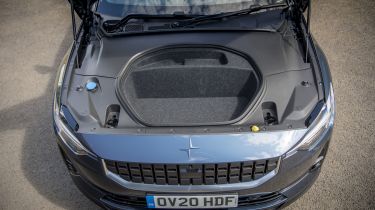 Generally speaking, the Polestar 2 is on par with its Tesla Model 3 rival when it comes to size and interior space: the Polestar is slightly shorter and wider overall, but certainly weighs a good chunk more. There's a good amount of space front and rear and, as with many electric cars, there's a boot space both in the rear and under the bonnet. The Polestar is run close by its Tesla rival in a few areas, but on balance there's much to like about the 2's packaging and versatility.

There's a good amount of space inside the Polestar 2. Front-seat passengers get plenty of head, leg and elbow room, but could find things a little cramped in the rear due to the sloping angle of the roof line. This also means the door aperture is smaller than some might like, especially if there are child seats to fit. Similarly, the car's panoramic roof robs a little space.

Interior storage is adequate – there's a cubby ahead of the drive selector on the high-set centre console, two large door bins and further space, plus two cupholders, under the centre armrest. There's a flip-down armrest in the rear too for extra comfort; all four main seats are very comfortable, but centre-seat occupants are hampered by a transmission tunnel – a hangover from the Volvo XC40 – that encroaches on leg space. 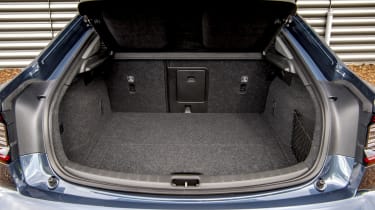 There are two boots in the Polestar 2: one in the traditional location and another under the bonnet. This 'frunk' is small and slightly less usable than that found in a Tesla Model 3, but has enough space for some charging cables.

The main boot measures 405 litres – 20 litres down on its Tesla rival – but has the benefit of a full hatchback opening rather than the Tesla's 'letterbox' saloon aperture. The extra flexibility here should make loading larger items far easier. Volume is limited by that steep rake of the rear window, as is the view out the back.