If all you want is an electric city car, a secondhand Peugeot iOn could fit the bill, but there are better alternatives 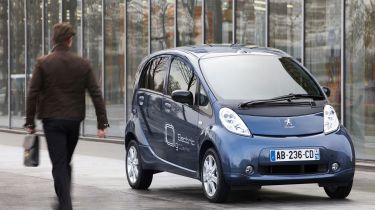 The Peugeot iOn was one of the first electric cars to be sold in the UK and one of three almost-identical co-developed models, along with the Mitsubishi i-MiEV and Citroen C-Zero. The Mitsubishi appeared first; the cars' electric motor and battery system originated with the Japanese brand.

The iOn was withdrawn from sale in late 2018, as it was no longer eligible for the government's plug-in car grant. Peugeot now offers much more up-to-date and appealing electric cars such as the e-208 hatchback and e-2008 SUV.

As its looks suggest, this car is very much intended for city driving. There's a good view out for the driver thanks to the tall and narrow body, and it's easy to thread through narrow streets and tight car parks. While it was on sale, the iOn rivalled the likes of Volkswagen e-up!, Renault ZOE and Smart EQ ForTwo.

Compared to more up-to-date electric cars, the iOn is a poor performer in most respects. Its electric motor makes only 66bhp and range on a full charge is quoted as 93 miles – but that was on the old NEDC test cycle. Most owners online reckon about 65 is as good as it gets in everyday driving.

Charging fully takes around seven hours from a regular household socket, so the car is ideal for pottering around town during the day before being parked up to replenish overnight. It only gets a three-pin charging cable as standard; owners wanting to plug in to a fast charger or wallbox had to pay extra for an appropriate cable when ordering their iOn.

In terms of standard kit, you get what you need, but not much more. That includes alloy wheels, six airbags, digital radio and climate control, but you won’t find any of the niceties common in more modern cars. There’s no Apple CarPlay or Android Auto, for instance, and no autonomous emergency braking, either.

When it comes to smartphone connectivity, Bluetooth is as good as gets in the iOn. Apart from metallic or pearlescent paint, the only option offered when the car was new was a remote-control pack that allowed you pre-set the time you wanted to charge the car and pre-heat the interior before setting off.

To drive, the iOn is at its best as a city car. Its tiny size is a big help, making it very manoeuvrable. And despite having just 66bhp, it’s also quick to 30mph and more than able to keep up with all but the quickest traffic around town. 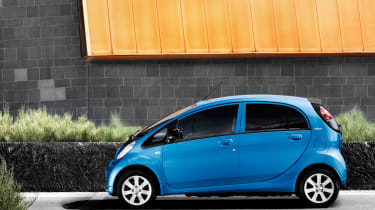 However, if you venture beyond the city limits, you’ll soon find the car’s limitations. Acceleration is much slower beyond 40mph, which makes out-of-town excursions frustrating. A top speed of 81mph means that, in theory, the iOn can manage a motorway trip, but that sort of speed chews through the battery power at an alarming rate, while the car itself feels relatively unstable at motorway speeds.

Similarly, it’s best to avoid using the iOn's capacity to the full. Stick to just a couple of people on board, and it’ll do fine. But if you put a couple of big adults in the back, they’ll struggle for legroom. And as for the boot, if you need to find space for anything more than two or three bags of shopping, you’ll have to use one of the seats.

Overall, it’s hard to recommend the iOn. It’s pretty much a one-trick pony and while it’s good at that trick, it’s showing its age too much. More modern electric-car designs have a much broader range of abilities, as well as better equipment. A used iOn would make a great little runaround as a second car, but for anything else, it's not really suitable.

For a more detailed look at the Peugeot iOn, read on for the rest of our in-depth review.