The refreshed 2020 Smart EQ ForTwo Coupe retains all of the model's charms, but also its significant drawbacks 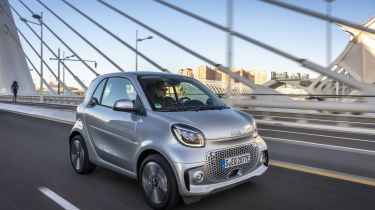 Mercedes' small car sub-brand Smart has gone fully electric for 2020. The company has offered various electric versions of its ForTwo and ForFour city cars over the years, but has now ditched the petrol versions completely in order to focus on zero-emissions models.

Falling under the familiar EQ brand, there are three Smart models to choose from. The original is the two-seat EQ ForTwo Coupe, but there’s also a Cabrio version, as well as the four-seat ForFour. Each was updated with a minor mid-life facelift in early 2020, although the electric powertrain under the metal is largely unchanged, meaning the models' somewhat underwhelming driving range and charging times remain.

The ForTwo is priced strongly at less than £17,000 for the entry-level version, but there's no getting away from the fact that the Skoda Citigoᵉ iV (which starts at around that figure without fast charging) will get you almost twice as far on a single charge, and carry four rather than two adults while doing it.

On the outside, the Smart's styling has been updated, with a smooth nose, some new wheel designs, fresh tail-light graphics and a tweaked rear spoiler. Inside, the centre console has been reshaped and features a smartphone tray as well as two cup-holders.

Unfortunately, the somewhat clunky infotainment system, dating back to Smart's collaboration with Renault, has been carried over; it feels badly out of date next to rival systems. There's Android Auto but no Apple CarPlay for now, however Smart is promising an upgrade a few months after launch, so it may be worth holding out for this.

To drive, the revised ForTwo is almost the same as its predecessor, which is unsurprising given there have been no changes to the drivetrain. It's rear-wheel drive and gets from 0-62mph in a leisurely 11.6 seconds, but a relatively light weight, a turning circle tighter than a London taxi's and instant electric-motor torque make it a fun and satisfying car to dart about town in.

The electric motor is pretty quiet and the ForTwo is generally comfortable, but its short wheelbase means it's prone to bouncing around on bad roads; it's a good idea to use its agility to dodge potholes instead of driving over them. The car isn't completely out of its depth on the motorway, but realistically its range will shrink even further at sustained high speed; this should be seen as a vehicle for urban commuting or suburban shopping and social trips only. 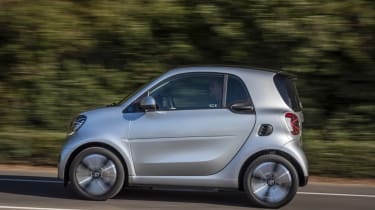 With charging speed limited to 22kW by the on-board charger, overnight charging at a home wallbox or daytime top-ups at work if possible are your best options, as the Smart can't charge any faster at the high-speed 50kW or 100kW stations that are starting to appear around the country in increasing numbers.

Being electric, it’s safe to suggest the Smart ForTwo will be more reliable than its petrol or diesel equivalents, largely due to the fact there are fewer moving parts. That said, while brand didn’t feature in the most recent Driver Power owner satisfaction survey due to a lack of responses, parent company Mercedes finished just two places from the bottom – in 28th position. One big complaint was with regards to running costs, which clearly won’t be so much of an issue on the small electric ForTwo.

Speaking of running costs, the Smart ForTwo surely takes the crown as one of cheapest new cars to run. There’s no road tax to pay – all electric cars are exempt – and company-car drivers avoid potentially pricey Benefit in Kind (BiK) tax completely for the 2020/21 tax year. If you charge at home and make use of a domestic electricity tariff, it’ll cost only a few pounds to top up the batteries, as well.

There are four trim levels: 'passion advanced', 'pulse premium', 'prime exclusive' and the limited-run 'Edition 1', but the best value is probably to be found with the entry-level version, as the higher trims just add features like larger alloy wheels, a reversing camera and ambient interior lights, which seem like overkill on such a small and simple car.

Overall, the Smart EQ ForTwo seems ideally suited to serve as a household's second car, taking in commuting, shopping or station car-park shuttle duties, and sitting alongside a longer-range electric car or plug-in hybrid for trips further afield. On its own, though, it seems pricey for what you get compared to other small electric cars like the aforementioned Skoda, as well as the SEAT Mii electric, Volkswagen e-up! and considerably longer-range Renault ZOE. 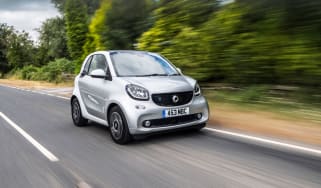 The Smart EQ ForTwo is a fantastic city runabout, but it’s hampered by its two-seat body, limited practicality and relatively short electric range
Skip to ContentSkip to Footer