The Peugeot iOn is quick to 30mph and makes a superb city car, but it really struggles out of town 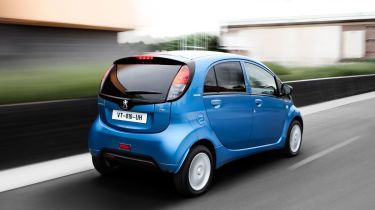 As long as you want no more than a good city car, you’ll be perfectly happy with the iOn. In fact, it’s very good at cutting its way through the urban jungle, with the instant response of the electric motor making it quick from one set of traffic lights to the next. And, being an electric car, it does it all in near-silence.

Trouble is, once you get beyond city limits, it shows its limitations. The acceleration that was positive and keen around town becomes laboured and frustrating and, if you venture as far as the motorway, you’ll find it a pretty unpleasant experience. Other, more modern electric cars are much better able to tackle high-speed runs.

Electric cars deliver all of their torque as soon as you press the accelerator, which is just what you want in a city car like the iOn. It means it’s very quick off the mark, despite only having 66bhp. So, if you’re at the front of the queue, as soon as the lights turn green, you can get ahead of traffic.

And, because you can be sure how keenly the car will respond, you can dive for gaps in traffic with more confidence. The car certainly has no problem keeping up with everyday city traffic and, best of all, it does all that in near-silence. If you only ever drive an iOn around town, you’ll be surprised to see its distinctly leisurely 0-62mph time of 15.9 seconds. The truth is that it takes 10 seconds less to get to 30mph, which is why it feels so quick.

Trouble is, once you’re beyond the urban jungle and no longer at the mercy of 30mph limits, the car really shows its limitations and struggles for any sort of performance. The rate of acceleration slows only too obviously above 40mph – in direct contrast to the speed at which the charge in the battery drops.

Its top speed is 81mph, so using it on the motorway isn’t out of the question. But, you'll have to restrict yourself to the inside lane to conserve the charge in the battery.

As we’ve said, the iOn is at its best around town and it’s helped in no small part by its shape. With the driver sitting a little higher than in a conventional hatchback, the view out is better. And, the short length of the car combined with its narrow body makes it ideal for cutting through heavy traffic. The suspension is far from ideal when it comes to tackling the challenges of the city. Traffic-calming measures have the opposite effect on the driver and when the road surface deteriorates, so does the ride quality.

What might surprise you is that such a high-sided car doesn’t suffer badly from body lean. That’s because the batteries are under the car’s floor and the centre of gravity is very low as a result. Mind you, with vague steering and limited grip from the iOn's narrow tyres, you soon learn not to drive it hard at mid to high speeds.

Likewise, aside from any worries about the effect such high-speed runs have on the range, you tend to keep away from the motorway, because it's unstable and noisy there.