The Peugeot iOn is designed as an urban runaround and is spacious and practical enough for that, but no more 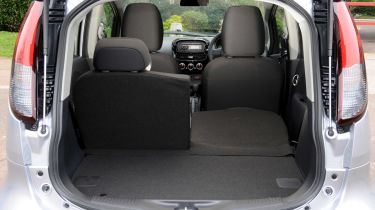 It’s obvious from a glance that the iOn is a small city car, so it’ll come as no surprise that it isn’t the biggest little car. In fact, there are only four seats inside. Essentially, Peugeot seemed to expect the car would be used mainly just by its driver, and that they’d only occasionally have passengers along.

So, while the accommodation in the front seats isn’t too bad, things are a bit tighter in the back. And, although the batteries under the floor don’t eat into the boot space too much, the boot is still pretty small. It won’t take too much shopping to fill it up completely.

As long as you’re in the front, you won’t have too much to complain about. There’s decent head and legroom, as well as height adjustment for the driver’s seat. However, in contrast to more modern cars, the iOn doesn’t have any form of adjustment for the steering wheel. So some drivers may struggle to get perfectly comfortable behind the wheel.

Things are a little bit tighter in the two rear seats, but there’s enough space to take a couple of adults for a short journey. What’s rather less impressive is just how little storage space there is. There are a few cubbies in the front, but none in the back.

As you can perhaps tell from the tall-sided looks of the iOn, its batteries and electric motor are hidden away under the floor. With that in mind, boot capacity of 166 litres isn’t all that bad, as it’s big enough to take three of four bags of shopping.

However, to give you an idea of how poorly that compares to other small cars, a Volkswagen e-up! will take 250 litres, while the Renault ZOE – also a full electric car – will take more than 300 litres. To take that much in the iOn, you’d need to fold down the two rear seats, each of which drops individually.

With them down, they leave a flat floor and a total capacity of 860 litres. That’s enough for a weekly supermarket shop, although still well behind the ultimate carrying capacity of a ZOE.