The Citroen C-Zero is spacious and affordable, but its limitations make it incredibly restrictive 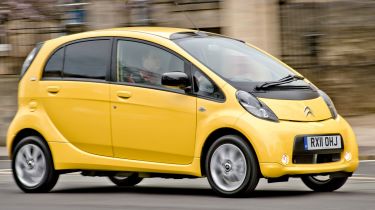 The Citroen C-Zero was designed as a small urban runabout for low-mileage drivers. Introduced in 2010 as part of a joint project between Citroen, Mitsubishi and Peugeot, the C-Zero is virtually identical to its sister cars the Peugeot iOn and Mitsubishi i-MiEV. All three have the same top speed, the same 0-62mph time and the same weight: only the badges really set the cars apart.

They're also all now off sale in the UK, having ended their run in late 2018 when their eligibility for the government's plug-in car grant ended due to the amount of range they'd return under the revised WLTP efficiency test brought in around then. Sales figures were never huge in the first place, but a handful can usually be found on the used market.

Citroen quoted a range of 93 miles (derived from the now-discontinued NEDC test) from the C-Zero's 14.5kWh battery, but in the real world you should expect around 65 miles at most miles. Citroen also said the C-Zero could be charged from flat to 80% capacity in just 30 minutes at a dedicated fast-charging station. But be aware that a full charge from a normal household socket will take between six and 11 hours.

The C-Zero came with two charging connectors: a standard one that plugs into a port on the driver’s side of the car and a quick-charging one located on the passenger side. Producing 66bhp, the Citroen has a top speed of 81mph and will do 0-62mph in 15.9 seconds. These figures are quite leisurely, but at town speeds – the 0-30mph region – the C-Zero is actually quite brisk. That makes it ideal for urban driving.

While the C-Zero might be sprightly around town, it’s not what you’d call agile. The steering is vague and the body leans in corners, forcing you to make turns at quite sedate speeds. Nor was there much choice for the initial owners when it came to specification. There was only one trim level, and only one optional extra: remote-control heating/cooling and charge programming were bundled together.

Standard kit included automatic headlights and 15-inch alloy wheels, while a leather steering wheel, a 12V socket and camel-cloth-finished seats can be found inside. A DAB digital radio is fitted, and Bluetooth is available for smartphone connectivity. A USB port is also provided for in-car charging. Thanks to its tall roof, the C-Zero is deceptively spacious and will comfortably seat four adults while carrying a week’s shopping in the boot. However, there are none of the driver aids that have become common in recent years, such as autonomous emergency braking, lane-keeping assistance or even a reversing camera. 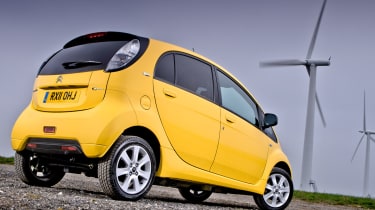 When the Citroen C-Zero counted the likes of the Volkswagen e-up! and Smart EQ ForFour among its rivals, while the Renault ZOE offered a much more grown-up take on the small electric car (and has since been further improved). The original e-up! offers more range – up to 99 miles on a charge, while the BMW i3 delivers around 124 miles of real-world range. You could also consider the Renault Twizy, which undercuts even the C-Zero on price and delivers nearly as much range. However, you’d relinquish the practicality offered by the C-Zero’s boot and four-seat layout.

Despite the low starting price and low running costs (a full charge will likely cost around £2), the C-Zero is hard to recommend. Its 60-mile range is a big hindrance, even for occasional use, and more recent arrivals on the electric-car market are far more capable than the Citroen. It might work in a two-car household for weekly shops, the school run and perhaps a short commute, provided you can charge it regularly.

For a more detailed look at the Citroen C-Zero, read on for the rest of our in-depth review.