As it uses the same technology as the Nissan Leaf, the Nissan e-NV200 currently offers the longest range of any electric van on sale 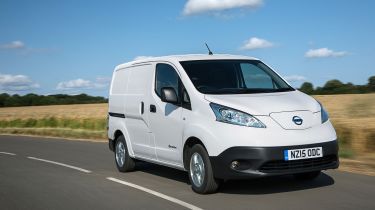 The Nissan e-NV200 is one of a growing number of electric vans available in the UK. Its only real rival in the small-van class right now is the Renault Kangoo Z.E., as both the Citroen Berlingo Electric and Peugeot Partner Electric have been discontinued. The main advantage that the e-NV200 has over these vans is its longer driving range, but new versions of the Citroen and Peugeot will arrive before very long, and could leave it looking pretty outdated.

The e-NV200 has been on sale since 2013, but in the interim was updated with the battery from the second-generation Nissan Leaf. That saw its range extended by around 60% over the old model's, with maximum distance now given as 124 miles. There's more than enough capacity in the 40kWh battery for the e-NV200 to cope with a day’s work, especially in urban areas.

As with the Leaf, the e-NV200 comes with three charging connections that plug into a flap in the van’s nose. Add a wallbox charger at your home or business premises when you buy the van, and you’ll be able to charge the battery from flat in seven hours, so overnight charging will be a breeze.

From a standard three-pin socket, it takes over 12 hours to charge from flat, while at the other end of the spectrum, high-voltage public charging from a CHAdeMO supply can replenish the battery from 10 to 80% in as little as 45 minutes. However, lower-spec versions of the e-NV200 don’t have this facility available as standard.

The Visia trim level gives you a no-nonsense van, with steel wheels, sliding doors, a steel bulkhead and offset steel double doors at the back. There’s a basic stereo, electric windows, a USB connection and Bluetooth, but the only concession to modern technology as standard is push-button starting. However, you can add a rapid charger to match the higher-spec models in the range, while the Heat Pack allows you to pre-condition the cabin while the van is still plugged in, saving battery capacity for driving.

Acenta spec adds rapid charging as standard, as well as automatic air-conditioning, a reversing camera, battery heating and cooling to help the van maintain its charge, and cruise control with speed limiter. Sat nav is available as an option. Move up to Tekna trim and sat nav is standard, as are automatic lights and wipers, while 15-inch alloy wheels are offered to smarten up the e-NV200’s looks.

While the e-NV200 uses the same battery and electric motor as the Leaf, it shares a platform with the old Nissan Juke and Nissan Note. The extra weight of the batteries mean the 107bhp electric motor offers modest rather than scintillating pace, with a quoted 0-62mph time of 14 seconds. Still, with lots of torque available from a standstill, the Nissan feels sprightly off the line – just don’t expect a searing wave of acceleration all the way to the speed limit.

The weight of the batteries is set low, so it doesn’t have as adverse an effect on handling as you might expect, but the e-NV200 is still pretty dull to drive. Light steering helps with low-speed driving, while the suspension is dampened a little by the extra weight of the batteries, so the electric van is a little more comfortable than the diesel version.

The e-NV200 has a cargo volume of 4.2 cubic metres, which puts it slightly ahead of its closest rival, the Kangoo Z.E. And there’s a payload of 705kg, which again is slightly ahead of the Renault. Of course, if you use the van’s maximum payload, then battery range is going to suffer, but these vans tend to be used by companies more interested in load volume than outright carrying capacity.

Overall, the Nissan e-NV200 benefits from the technology used in the Nissan Leaf to lead the way in the electric-van market. It has the longest range and highest payload of any small electric van on sale, which makes it the most viable model for small business users looking to make their fleet more eco-friendly.

For a more detailed look at the Nissan e-NV200, take a look at the rest of our in-depth review... 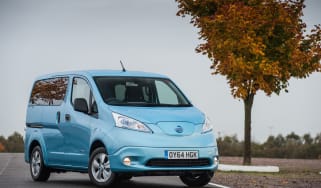 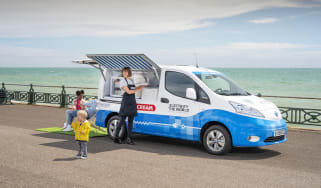 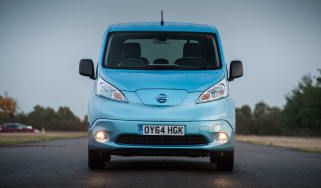