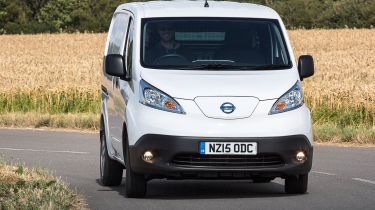 Vans are all about cargo capacity, and the Nissan e-NV200 has 4.2 cubic metres of space in the load area. Only the far larger Renault Master Z.E. has more load volume in the electric-van market, but at least the Nissan is more urban-friendly, with narrower dimensions and a lower roof to get through width and height restrictions.

A steel bulkhead is fitted as standard, while box-section wheel wells don’t intrude into the load area too badly. There are twin sliding side doors to ease access kerbside, and at the back are double doors that are split 40:60.

As it’s a two-seater, there’s decent room in the e-NV200. The tall body creates plenty of headroom and the high-set seats give a clear view of the road ahead, although the A-pillars are on the thick side and the extra quarterlights ahead of the wing mirrors don’t really boost visibility.

Those large wing mirrors mean the view rearwards is good, though, and if you go for a Tekna model, you also get a wide-angle reversing camera mounted above the number plate, but there are no parking sensors.

There’s no overhead storage like you get in a Renault Kangoo Z.E., but the passenger seat folds forward to create a tray table, there’s a shallow tray between the seats with 12v and USB sockets next to it, two cup-holders on the dashboard, a modest glovebox, small door bins and a dash-top tray behind the centre console.

At 4.2 cubic metres, the e-NV200 has a slight advantage over the Maxi version of the Renault Kangoo Z.E., which has four cubic metres of space. The Nissan’s large rear dimensions mean it has space for two Euro Pallets in the back, with 1.22 metres of space between the rear wheelarches, and a cargo area height of 1.36 metres.

The rear sill is 524mm off the ground, and there are six D-ring lashing eyes set into the load area floor, rated at 500kg maximum.

The e-NV200 van has a payload of 705kg, which is 65-100kg more than a Renault Kangoo Z.E. can carry. However, bear in mind that using the van’s maximum carrying capacity will work the electric motor harder, thus reducing driving range.

Nissan offers the usual range of load area options, including a floor protector (standard on Acenta and above), and extra protection for the cargo area walls and doors. If you add glazing, then mesh screens are available, while a mesh bulkhead is available that allows you to fold that and the folding passenger seat to carry items as long as 2.8 metres in length.