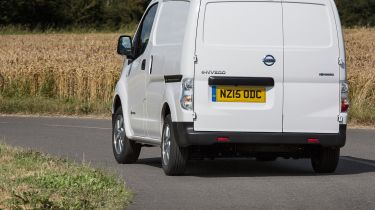 Prices for the Nissan e-NV200 start from just over £20,000 excluding VAT and including the government’s Plug-In Van Grant (PiVG), which stands at a maximum of £8,000. All versions of the e-NV200 have the same efficiency figures, so adding alloy wheels doesn’t have an adverse effect on the van’s electric range.

The Nissan scores an advantage with that driving range. Thanks to that 40kWh battery – 7kWh larger than the Renault Kangoo Z.E.'s – the e-NV200 has a claimed range of 187 miles at city speeds, and you’ll easily manage more than 120 miles in a day without resorting to energy-saving techniques.

Electric vans are exempt from road tax, while Benefit-in-Kind costs for business users are favourable compared to those for diesel models. However, the costs will rise over the coming tax years, although still not as high as their diesel equivalents. In addition, electric vans such as the e-NV200 will be exempt from future low-emissions zones.

The latest 40kWh version of the Nissan e-NV200 doesn’t have any insurance group ratings against it. The last model was in group 8, which is a slightly higher than applies to rivals such as the Peugeot Partner Electric.

Nissan offers its five-year/100,000-mile warranty on the e-NV200, while the dedicated electric components are covered for the same time period, but are limited to a total distance of 60,000 miles. Nissan also offers breakdown cover for five years/100,000 miles.

On top of that, the battery is guaranteed against loss of capacity (where the battery doesn’t charge up higher than nine bars out of 12 on the digital display) for eight years/100,000 miles. Unlike other models in the Nissan commercial vehicle range, Nissan doesn’t offer extended warranty coverage for the e-NV200.

Nissan’s network of dealers is set-up to handle after sales on electric models, and service plans are handled by dealers, rather than having a country-wide service scheme.

As electric vans are a niche choice, their desirability is open to question and residual values are on the low side. The e-NV200 has been on sale since 2014, and early examples can be had for as little as £8,000. However, these early cars have a smaller battery and lower range – the latest long-range model should be more desirable.