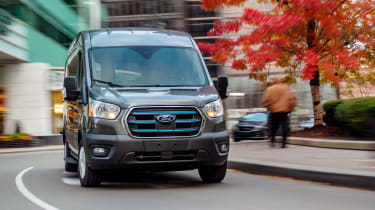 Like all of those models, the E-Transit will primarily be aimed at urban 'last-mile' delivery companies, although a 67kWh usable battery capacity means it offers significantly more range than many of its competitors, at an estimated 217 miles. Recharging can be completed overnight in eight hours from a three-phase, 11kW source, while up to 115kW rapid-charging capability from public points means a top-up from 15 to 80% capacity during the working day will take just over half an hour.

The van is powered by a 265bhp electric motor and has peak torque of 430Nm – figures Ford says will make it the most powerful fully electric van on the European market. A range of different driving modes can tailor the E-Transit's behaviour to a variety of needs; Eco Mode limits top speed and acceleration, while optimising the climate control in order to eke out an estimated 8 to 10% more range from each charge, for example.

With its battery pack mounted low down in the floor, the E-Transit offers just over 15 cubic metres of load space in standard configuration – the same as the rear-wheel-drive diesel Transit. The panel van will have a maximum payload of 1,616kg, while the chassis cab increases that to 1,967kg. Ford says it'll offer a total of 25 configurations for the E-Transit in Europe, including panel-van, double-cab-in-van and chassis-cab bodies, as well as multiple length and height options, plus a range of gross vehicle mass (GVM) options up to 4.25 tonnes.

Inside, pre-conditioning allows the van to be cooled or heated to a desired temperature while charging, ensuring a comfortable working environment for the driver. The E-Transit also features a 12-inch touchscreen running Ford's latest SYNC 4 software, offering voice commands, sat nav and over-the-air updates.

Available safety systems will include traffic-sign recognition, an intelligent speed limiter, pre-collision assistance, blind-spot monitoring, lane-changing assistance, a 360-degree camera and adaptive cruise control. Ford is also promising the E-Transit will come with a full suite of connectivity features, including an on-board modem, to help owners manage, monitor and optimise their fleet.

Running-costs savings are assured due to the lower cost of electricity compared to diesel, while Ford estimates the E-Transit will be 40% cheaper to service than its diesel-engined equivalent, too. Its battery will come with an eight-year/100,000-mile guarantee. The battery can be used to power more than just the van's electric motor: an optional feature called 'Pro Power Onboard' lets the E-Transit be used as a mobile power source, providing up to 2.3kW for operating tools and other equipment.

The E-Transit will join the Ford Transit Custom Plug-in Hybrid and Tourneo Custom Plug-In Hybrid in the brand's range of electrified commercial vehicles, along with the Kuga Plug-In Hybrid and forthcoming Mustang MACH-E in its passenger-car range. It'll be built alongside the hybrid Transit Custom at Ford's Otosan Kocaeli factory in Turkey, and Ford says fleet trials with a variety of customers in key European markets will take place during 2021, ahead of general sales beginning in 2022. 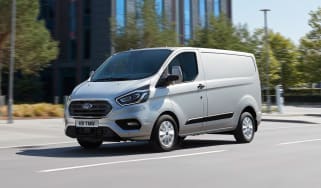 A plug-in hybrid version of the Ford Transit Custom van is due in late 2019, with a 1,000kg payload and up to 31 miles of electric range
Skip to ContentSkip to Footer