New Mercedes eSprinter van offered in Progressive trim only, priced from £43,950 after grant and excluding VAT

Mercedes has announced pricing and specifications for its new eSprinter electric van. Prices start at £43,950 excluding VAT but after the government plug-in van grant has been applied; order books are open now.

Standard equipment includes a heated driver's seat with armrest, two front passenger seats, air-conditioning, DAB radio and Bluetooth connectivity. A wooden floor in the load area and a full width partition are also included. The eSprinter is only available in the Progressive trim level, one step up from the entry-level Pure that the diesel-engined model is offeredin.

A full range of active safety equipment is standard, including active braking, crosswind and attention assistance. Mercedes' Emergency eCall system – which can automatically alert the emergency services in the event of a crash – also features. The eSprinter also comes with a suite of fleet communication and tracking systems so operators can keep tabs on their van.

There's a choice of five solid paint colours as standard, with optional metallics costing £565; cloth seats are standard, but can be upgraded to faux leather for £60. The eSprinter comes as standard on 16-inch steel wheels, but optional alloys are available from £650.

Production of the eSprinter electric van began earlier this year at a factory in the German city of Dusseldorf. The plant there has long specialised in Sprinter production – turning out over 4.5 million examples to date – and will now also build the electric version of the big-selling model.

The Mercedes eSprinter is a rival for the Citroen Relay Electric, Fiat Ducato Electric, Peugeot e-Boxer, Renault Master Z.E. and Volkswagen e-Crafter. Like those vans, it's aimed primarily at businesses conducting multi-drop 'last-mile' deliveries in urban areas subject to (or soon to be subject to) emissions restrictions.

The eSprinter shares its running gear with the smaller eVito electric van, which goes head-to-head with electric versions of the Citroen Dispatch, Peugeot Expert, Toyota Proace and Vauxhall Vivaro. 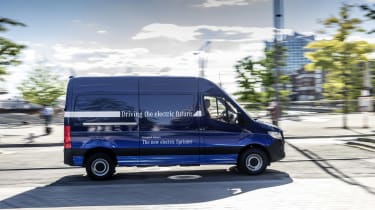 The eSprinter is initially offered in high-roof panel-van form, with a maximum gross weight of 3,500kg and maximum load volume of 11 cubic metres. Like the entry-level diesel Sprinter, the eSprinter is front-wheel drive, with an electric motor sending 114bhp to the wheels.

Standard charging speed is 20kW, but this can be upgraded to 80kW rapid-charging capability as an option. The former takes two hours to charge from 10 to 80%, while the latter cuts that time to 30 minutes. Both options come as standard with an eight-metre Type 2 cable.

Mercedes has fitted the eSprinter's batteries under the loadbay, meaning load space "remains uncompromised". There are four parallel batteries, each of which can be replaced individually if required. The eSprinter boasts a range of up to 96 miles; Mercedes claims it'll retain 70% of its battery capacity after eight years. Buyers can choose between a standard 75mph top speed, or an optional 50mph limit.