Electric version of the Fiat Ducato will cost from £46,675 excluding VAT, after the government grant 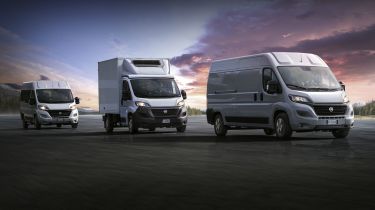 Fiat Professional, the Italian manufacturer's commercial-vehicle arm, has announced UK pricing for its e-Ducato electric van, which will start at £46,675 excluding VAT once the government's plug-in van grant has been deducted. Orders are now being taken for the full range of panel van, chassis cab and passenger minibus versions (pictured above).

Fiat says total cost of ownership (TCO) has been a key focus in the model's development, and confirmed that the E-Ducato will be offered in the same range of body variants as the diesel equivalent, with load volumes from 10 to 17 cubic metres and a maximum payload of 1,950kg.

The E-Ducato’s motor will produce just over 120bhp and generate 280Nm of torque, while a choice of 47 or 79kWh batteries will offer ranges from 120 to 192 miles in urban conditions – or 78 to 148 miles on the 'combined cycle' representing mixed driving.

Top speed is limited to 62mph in order to preserve range, while 0-30mph acceleration takes less than six seconds. The 47kWh battery can be replenished in just under two and a half hours from a public charging point, while the 79kWh version takes four hours to do the same.

Normal, Eco and Power driving modes allow for flexibility between maximising range or motor power as needed depending on the job at hand. Fiat describes the E-Ducato as "100% connected", with a suite of connectivity features that'll allow it to slot into fleet-management systems of larger operators. 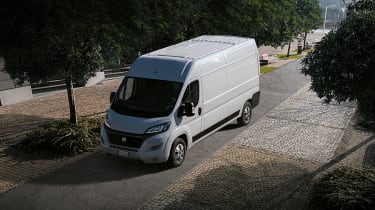 Stepping up to the eTecnico gets you a seven-inch touchscreen with Apple CarPlay, Android Auto and sat nav, as well as a rear parking camera with sensors, embroidered headrests, front foglights, heated power-folding door mirrors, LED daytime running lights and a leather steering wheel.

The e-Ducato passenger minibus can be ordered in one size specification seating between five and nine passengers as required. Every configuration is available with the choice of either the 47 or 79kWh battery.

This model's unveiling follows similar announcements of electric versions of the Peugeot Boxer and Citroen Relay, sister models to the Fiat. However, it seems all three won't use the same electric powertrain: while the Citroen and Peugeot are getting a third-party conversion by BD Auto, the E-Ducato is being described as "designed and developed by FCA [Fiat Chrysler Automobiles]".

In addition to the Boxer and Relay, the E-Ducato will also be a rival for the Renault Master Z.E. and Mercedes eSprinter in the large electric van class. All these models are aimed at urban-based delivery companies with short, multi-drop routes, enabling them to continue operating as low or zero-emissions zones are introduced to cities.