A compact electric vehicle makes a perfect urban runabout or small family car. These are the best small electric cars you can buy 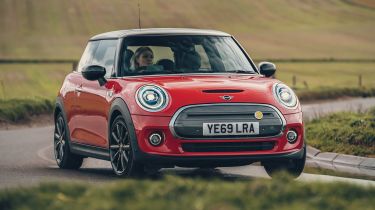 The amount of small electric cars on sale is increasing all the time, with more and more brands choosing electric drivetrains for their next city cars and superminis. Improvements in the range electric cars can extract from lithium-ion batteries means these newer models can easily meet most drivers’ needs.

They don't cost much to run, either: charging a small electric car at home typically results in running costs of around 3p per mile, which is much less than the most economical petrol cars can manage.

For example, a full charge of the Renault ZOE – which can return up to 245 miles of range – should cost just over £7 on an average domestic electricity tariff, and potentially even less if you can charge overnight when electricity tends to be cheaper.

However, while small electric cars are the cheapest electric vehicles on sale, there’s still some way to go before they become as affordable as the internal-combustion-engined alternatives. According to experts, this will happen within the next five years, but until then, buyers will have to factor in the lower running costs into the overall cost of ownership when they're making their purchasing decision.

To help you make that choice, we’ve put together the following list of the best small electric cars on the market. You can also check out our rundown of the cheapest electric cars you can buy. 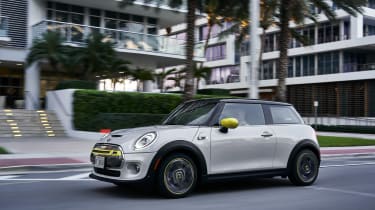 It's got all of the style appeal of other MINI models, so with the addition of electric power the MINI Electric a very attractive proposition. It's best suited to urban motoring as its range sits at less than 150 miles, while its three-door-only body limits flexibility a little – but if you're after a stylish small electric car that's great fun to drive, the MINI is one of the best. Read our full review here. 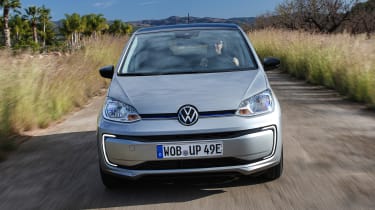 Next up is a group of closely related models: the Volkswagen e-up! is one of two electric city cars offered by Volkswagen Group brands – a group that previously included the Skoda Citigo e iV before it was discontinued. The e-up! returns 162 miles of range from a 36.8kWh battery, but with a price tag of over £20,000 after the Government’s plug-in car grant has been applied, it’s the most expensive of the three. Read our full review here. 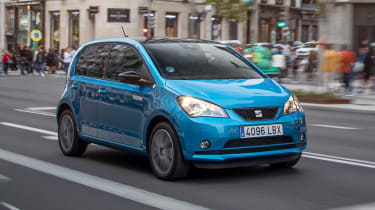 Last but not least, there’s the SEAT Mii electric. The recipe is very similar to that of its siblings, with good handling and acceleration up to 30mph making it ideally suited to towns and cities. It’s a little sluggish beyond 30mph, and while you won’t struggle to keep pace with motorway traffic, you’ll be aware that the 82bhp motor is approaching its limit of performance. Rapid charging is stand here, giving the SEAT a higher starting price than the Skoda. Read our full review. 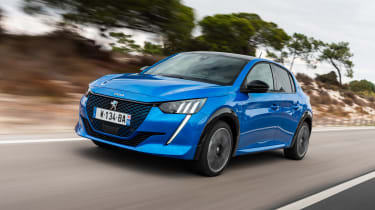 The latest Peugeot 208 is one of the most style-conscious small cars on sale, and one that was designed from the outset to have electric power (along with its Vauxhall Corsa counterpart below). The e-208 contains a 50kWh battery and will manage up to 211 miles of range, while the 134bhp electric motor will propel it from 0-62mph in 8.1 seconds. The ride is a little firm for our liking, but the sharp exterior styling is a triumph and certain to make bystanders look twice. Read our full review here. 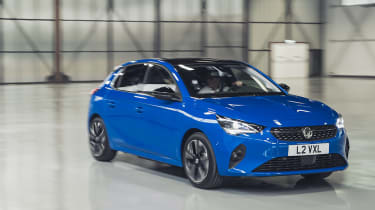 The Vauxhall Corsa-e is based on the same platform as the Peugeot e-208, and so it offers a very similar 205-mile range and an identical 0-62mph figure. This might not sound especially fast, but it'll complete 0-31mph in just 3.1 seconds, meaning it’ll be in its element on urban roads. It’s a shame the starting price is more than for the e-208, but some buyers may prefer the Corsa-e’s understated looks the the e-208’s eye-catching design. Read our full review here. 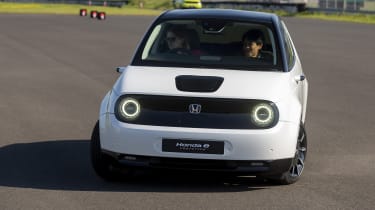 The Honda e takes a different approach to most small electric cars: the range offered by its 35.5kWh battery amounts to just 136 miles, although Honda reckons its efforts to keep the car light will make it better to drive – which in our experience seems to be exactly the case. The car is packed with technology, too, including a full-length touchscreen inside and external cameras in place of conventional door mirrors. No wonder it won our ‘Best car technology’ prize at the DrivingElectric Awards 2020! Read our full review here. 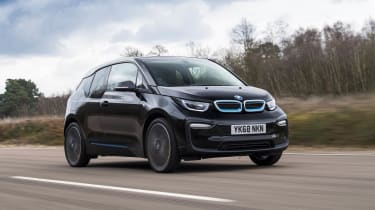 Launched back in 2014, the BMW i3 is now getting on a bit. However, its futuristic interior design means that it isn’t showing its age, and regular updates have ensured it has kept pace with rivals. Now featuring a 42.2kWh battery, the i3 will manage up to 193 miles of range, and it’s a joy to drive around town. It’s a pity that BMW has announced that the i3 won’t be replaced, although there should be far more choices on the market by the time it does depart. Read our full review here. 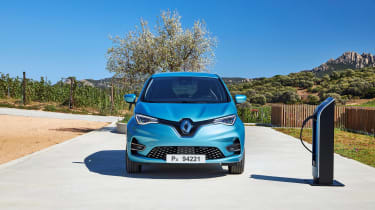 The latest-generation Renault ZOE is hands-down the best small electric car on sale: priced from just over £25,000, it offers an affordable route into long-range electric motoring and an overall package that’s hard to beat. The ZOE is well-equipped, tidy to drive and can be specced with CCS fast charging; useful for those occasions where you’ll need to top-up the battery mid-way through a longer drive. The ZOE is so good that we named it our Car of the Year for 2020. Read our full review here.