The Tesla Model X is an expensive car for private buyers, but running costs are low and it's good value for business users 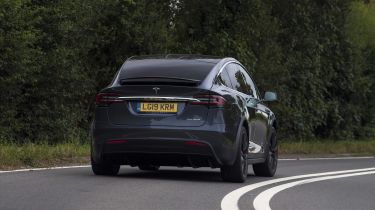 The Tesla Model X is an expensive car – that’s the long and short of it. Prices start at just over £83,000, rising to nearly £98,000 for the range-topping Performance. Even by Range Rover standards, that’s pricey for a retail buyer. Monthly prices aren’t cheap, either, and Tesla seldom offers interest-free finance.

Business users, however, might find the Tesla a more affordable proposition. For the lucky few whose company-car allowance will stretch to the Tesla’s lofty Performance price, it’s well worth considering, if only for the huge saving you’ll make on company-car tax.

A total absence of CO2 emissions means the Model X sits in the lowest bracket for BiK company-car tax and it'll incur no company-car tax whatsoever in the 2020/21 financial year, with BiK rates of just 1% and 2% to follow in 2021/22 and 2022/23. That's peanuts compared to what you'd pay for a diesel SUV.

Of course, the Tesla gets free access to the London Congestion Charging zone until 2025 and you’ll pay far less to fuel it than a petrol or diesel car. It should cost around £12.50 to charge the Tesla at home, depending on your tariff, while public pay-per-charge rapid chargers are likely to cost around £18. Tesla Superchargers cost of 20p per kWh, after you’ve used up an annual free allowance of 400kWh (around four full charges).

All versions of the Tesla Model X fall into the highest insurance group – as do many performance SUVs – and therefore will be expensive to insure. Make sure you get a quote before buying.

The Tesla Model X is covered by a four year/50,000-mile warranty, which is supplied by AXA insurance rather than Tesla itself, and it can be extended up to eight years. The batteries are covered by an eight-year/unlimited-mileage warranty.

A lot of electric cars have long service intervals, since there’s less to check, as their motors have far fewer moving parts than a diesel or petrol engine. However, Tesla recommends an inspection every 12,500 miles or 12 months; a routine interval for most combustion-engined cars.

Tesla also recommends that you connect the Model X to your home wi-fi in order to get the fastest download times for automatic software updates, which will see certain functions and systems in the car changing and improving overnight – just as your phone does when you update the operating system.

Like all fully electric cars, the Model X is exempt from road tax (VED).

Most expensive luxury SUVs and saloons lose their value very quickly, and the Model X is no different. Used-car experts reckon it’ll lose more than half of its value in the first three years and 36,000 miles; and the Performance could lose even more than that.