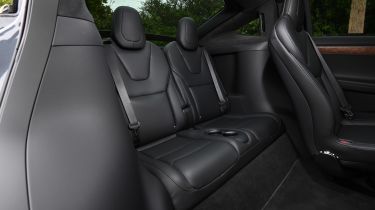 Being designed from the ground up as a pure electric SUV means the shape of the Tesla Model X isn’t dictated by having to accommodate a petrol or diesel engine. Although its outline has a bonnet, there’s nothing under it except a few mechanical service points and some storage space. In fact, between an unrivalled range of interior seating layouts and that extra storage space, the Model X is an extremely practical family car.

Another cost option is an ‘executive’ six-seat layout, with a 2+2+2 arrangement that leaves those in the middle with two standalone seats, and a space in the middle for passengers to more easily access the sixth and seventh seats. Regardless of which layout you go for, the seats in the second and third row can fold flat to give the Model X van-like carrying capacity.

Otherwise, the seats in the first two rows are comfortable and spacious, and flooded with light from the enormous sunroof. The two seats in the third row of the Model X (if you’ve added them) are okay by seven-seat SUV standards, but still best reserved for children. The Land Rover Discovery (which doesn’t offer a hybrid or electric model) is much better for sixth and seventh-seat passengers.

Anyone up front or in the second row will have plenty of room to stretch out, while visibility is excellent and there’s plenty of adjustment for the seat and steering wheel to allow drivers of any shape and size to feel appropriately cosseted. Getting in and out is easy, and the ‘Falcon Wing’ rear doors reveal a wide aperture, making access to the third row better than just about any other seven-seat SUV.

Mind you, the 15 seconds they take to open can become irritating. Don’t worry about the doors taking up space, though: they actually need less room to open than a normal side-hinged door, and a proximity sensor is fitted to prevent them hitting anything.

A 187-litre space under the bonnet will take a soft bag or some shopping, while the normal boot is big enough to cope easily with the most outdoorsy of families. Folding all the seats flat and using the front space as well adds up to 2,492 litres of load volume – the same as the bigger Mercedes GLS manages.

Loading is made easy thanks to a rear boot floor that can be raised for a reduced lip height; there’s also a removable panel for accessing a deep compartment where you can store the car’s charging cables.