The Tesla Model X has great real-world range, and access to Tesla’s Supercharger network is a boon for long-distance driving 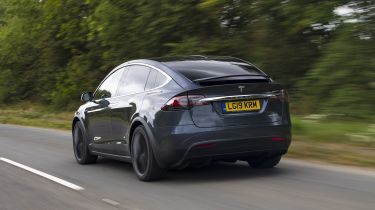 An October 2020 update gave the Model X – as well as its Model S sibling – a range boost, with the car now returning up to 348 miles on a single charge. The Performance offers a little less driving distance than the cheaper Long Range Plus model, discarding some range in order to achieve its astounding turn of pace.

In any case, the real-world range is up there with the best electric cars on sale, and the Tesla has the significant advantage of access to the company's Supercharger network. You plug the Tesla in using a port hidden in the corner of its rear light arrangement, which is great if you reverse into a charge point, but otherwise it means you’re likely to have cables trailing up the side of the car.

The Tesla Model X has a decent claimed driving range of 348 miles for the Long Range Plus and 340 miles for the Performance. The smaller and cheaper Jaguar I-Pace can only manage a maximum of 292 miles, so the Tesla will go further on a charge than most electric cars and will be suitable for anyone wanting to take long journeys in their stride.

Find one of the Tesla Superchargers, which will deliver a charge at up to 150kW, and you can have an 80% charge in the Model X in around 40 minutes, while a 50kW fast charger will do the same in around 90 minutes. Meanwhile, a 7kW home or workplace charger will take around 15 hours.

The Tesla Model X has a battery warranty of eight years, with no mileage limit. However, Tesla doesn’t guarantee the batteries against general degradation, so you can’t ask for a replacement battery if it drops below 70% of its as-new performance (i.e. the car’s maximum range drops to 70% or less than it was when new), as you can with many electric cars.