It doesn’t get more serene or versatile than the Tesla Model X, with its silent drive and five-, six- or seven-seat layouts 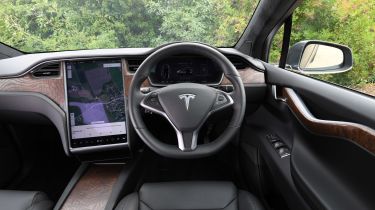 The Model X is a predictably serene car to travel in, with barely a whir as you pull away and only the faintest hint of wind noise intruding through the front when you’re up to speed. The chunky tyres do kick up quite a bit of noise that you’ll be conscious of due to the shortage of other background noise, however.

It’s disappointing, given how impressively minimalist and futuristic the dashboard looks, and how light and airy it feels thanks to the panoramic windscreen and sunroof, that general perceived build quality is a bit poor. All the switches that control things not directed from the huge central screen come from Mercedes of old, and some of the plastics on show can’t rival Audi or BMW for quality. It all feels a little dated and not always very solidly bolted together.

You’d be forgiven for being temporarily stunned by the sheer size of the portrait-orientated central touchscreen that dominates the Model X’s interior, and from which just about all the car’s functions are controlled. There are very few other buttons to worry about; it all happens on the screen, apart from your conventional indicator stalks.

Another screen serves a focal point for the driver, and it's located behind the steering wheel. This shows all the information you’d expect to find, and it’s configurable, so you can prioritise things like speed, remaining range, battery charge level, sat-nav directions and audio options.

Otherwise, the dashboard architecture is simple and some might say a bit boring, but it does the job. Of more concern is the fact that some of the materials don’t feel up to scratch for a car of this cost, and perceived build quality is also a bit questionable in some areas.

The Tesla Model X is lavishly equipped, whether you choose the Long Range or Performance. All have air-suspension, those eye-catching ‘falcon wing’ rear doors, a vast panoramic windscreen and sunroof, heated seats, keyless entry and drive and sat nav for the enormous standard screen.

You can choose to have five, six or seven seats. Opting for five means you get a conventional layout, with a three-person bench and a massive boot, which is the default, no-cost setup. A six-seat layout costs an additional £5,900; this is a sort of ‘executive’ layout, with a 2+2+2 arrangement that prioritises space for those in the middle. The seven-seat option is £2,900, and gives you a conventional seven-seat MPV-like layout.

The Premium Upgrades Package is now included as standard on all cars, bringing heated seats all round and a ‘medical-grade’ air-filtration system, as well as a heated steering wheel and windscreen wiper defroster. It even includes a ‘self-presenting’ front door, which opens as you walk up to the car with the key in your pocket.

'Autopilot' is also standard, meaning the car can change lanes, overtake slower traffic, and even pull on to slip roads according to the navigation route being followed. 'Full Self-Driving Capability' is an extra £5,900: tell the car your destination and it'll drive you right there, according to Tesla. However, while the system is apparently “ready to go”, it’s not yet approved for use on public roads and isn’t likely to be in the near future.

The vast, portrait-mounted touchscreen in the Tesla Model X is a real showstopper. It looks great and responds quite quickly, while thanks to its size you’ll be more likely to use it for standard internet browsing when appropriate. It is, after all, essentially a huge tablet with most of the functions that a tablet offers.

The old touchscreen weakness still apply when you're on the move, though. While it looks impressive, it might take you longer to completely get the hang of it compared to other systems if you’re used to a more conventional layout.

Install an app on your smartphone and you can control a range of functions, including the remote-opening doors, climate control and even the headlights. It’ll also show you how much range your car has left and keep you updated on charging progress.