DS may not be the most recognisable carmaker in the world right now, but Peugeot, Citroen and Vauxhall's upmarket sister company has ambitions to rival far more familiar brands – ones whose electric models have set the benchmark in their respective segments over the past few years.

Like other PSA Group companies, DS offers its models with a choice of powertrains: the DS 3 Crossback is available as petrol, diesel or purely electric. The E-TENSE badging signifies this as the electric version, and with prices starting at just over £30,000, it stacks up against cars like the Kia e-Niro and MG ZS EV, as well as, potentially, more expensive models from established premium brands.

You see, DS is to Peugeot-Citroen what Audi is to Volkswagen, SEAT and Skoda. Sharing much of its mechanicals with cars like the Peugeot e-2008 and Vauxhall Mokka-e, this DS 3 Crossback E-TENSE is the group’s take on the small premium electric SUV.

But does it offer enough in what's now an extremely competitive and increasingly crowded market? With electric-car buyers seemingly more interested in technology and battery capacity, is a fancy badge and some watch-strap leather enough to make it stand out? 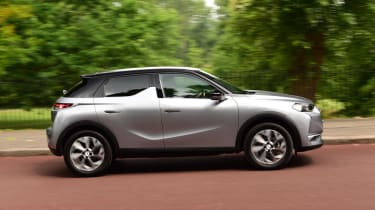 Despite the fact there are clearly similarities with other small SUVs, the DS 3 Crossback has its own style. The tapered roofline gives it an almost coupe-like appearance, while small details like the flush door handles and sharp lighting signature offer an upmarket edge. There’s precious little to tell the E-TENSE version apart from its petrol equivalent – the fuel filler cap is replaced by a charging port, for one – but there’s no blanked-out grille like you find on some of this car’s rivals.

The DS 3 is arguably a more compelling package as a pure-electric car than as a petrol SUV. It’s remarkably refined, and while the interior is a little busy, its quality and functionality put it on par with rivals. It loses nothing to its internal-combustion-engined equivalents when it comes to practicality, either, so while the DS 3 isn’t particularly well suited to larger families, it fits the bill nicely as a second car or urban runaround.

Overall, the DS 3 Crossback E-TENSE is packed with quirky French charm. That’s not to say it’s flawed; although it's priced on par with practicality-focused models like the e-Niro, it has more in common with style statements like the MINI Electric and Honda e. It’s decent enough to drive, and if you can live with its shortcomings, it could save you thousands on your annual tax bill as a company car.

For a more detailed look at the DS 3 Crossback E-TENSE, read on for the rest of our in-depth review.