All-new Skoda Enyaq iV SUV goes on sale later in 2020, with prices starting at £33,450 before the government grant

Following a number of teasers and design sketches, the new Skoda Enyaq iV SUV has finally been revealed in full. The pure-electric SUV will be available to order from late 2020, with prices starting from £33,450 before the Plug-in Car Grant (PiCG). Deliveries are expected to start in spring 2021.

The Enyaq iV can be had with one of two batteries: 62kWh or 82kWh, with the latter good for a 310-mile driving range on a single charge. A choice of two or four-wheel drive is also offered, along with four trim levels.

Skoda has used the Volkswagen Group's MEB electric-car platform to develop the Enyaq iV, making it a sister model to the Volkswagen ID.4 family SUV. The new car is the Czech manufacturer’s second pure-electric vehicle, after the Citigo-e iV city car, and will be the first MEB car to be built outside of Germany, with production taking place at the Czech brand's main factory in Mladá Boleslav.

The Enyaq iV builds on the styling of the Skoda Vision iV concept of 2019. The production car's name was announced in February 2020, when the company issued a badge shot featuring the Enyaq letters in the usual Skoda font.

Skoda says 'Enyaq' is derived from the Irish name Enya, itself taken from the Gaelic name Eithne, which means ‘essence, spirit or principle’. The Enyaq will be the first Skoda to use a new naming convention whereby its electric cars will begin with the letter E.

Rivals for the Skoda Enyaq iV include the closely related Volkswagen ID.4, the Ford Mustang MACH-E and more premium offerings like the Jaguar I-Pace. There are also rivals on the horizon from Kia and Mercedes. 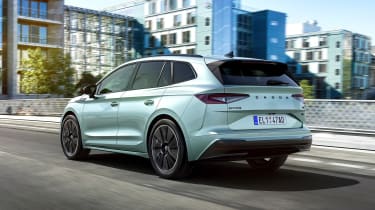 The larger-batteried Enyaq 80 starts at £38,950 before the grant and comes as standard with a heated steering wheel, rear-view camera and multiple drive modes, plus satellite navigation. The same system of standard Loft and optional Suite or Lounge interiors applies here.

At the top of the range, the Enyaq iV 80 Founder's Edition gets 21-inch alloys, 125kW charging, an illuminated grille and LED matrix headlights, plus unique interior leather. It's priced from £49,995 before the PiCG.

The Enyaq iV 60 uses a 62kWh battery and a 178bhp electric motor, with power fed to the rear wheels. Total claimed range is 260 miles. Along with all other Enyaq models, its standard maximum charging speed is 50kW; the 60 can be upgraded to 100kW as an option, while the 80 can be upgraded to 125kW.

Enyaq iV 80 cars use an 82kWh battery and 201bhp electric motor, again driving the rear wheels as standard. Skoda claims a range of 310 miles. It's not yet clear how the touted four-wheel-drive option will be implemented into the Enyaq range, but it's likely to be reserved for this more powerful model.

The Skoda Enyaq can be charged from a domestic 230V supply, or a 7kW home wallbox; Skoda claims a time of six to eight hours for the latter, depending on battery size.

Skoda also claims that the Enyaq 80 can rapid charge from 10 to 80% battery capacity in 40 minutes when upgraded to 125kW charging capability.

Skoda says that the Enyaq iV "ushers in a new era of Skoda interior design" – highlights include a large 13-inch infotainment screen and a strong trim line across the middle of the dash.

The Enyaq measures in at just under 4.7 metres long and a shade under 1.9 metres wide; Skoda claims that the interior is spacious thanks to a lack of intrusions from the car's running gear. A flat-floored interior maximises passenger space, while the boot measures in at 585 litres with the seats up. 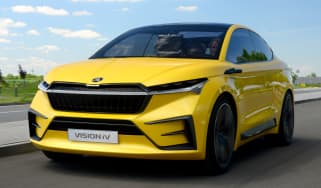