It's not the biggest, but the Mii electric is a comfortable city car all the same 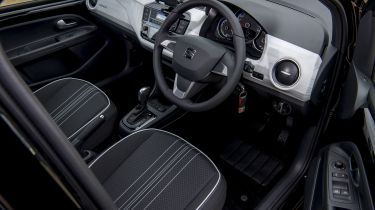 Those familiar with the original Mii, or indeed its Skoda and Volkswagen counterparts, will find little to write home about in the car's fairly spartan interior. Though well packaged, the interior space in the Mii hasn’t really changed from its petrol-powered days; there's enough room for two adults in the front and two in the rear as before. The front passengers get plenty of leg and headroom, while the rear quarters allow enough space for adult knees.

Despite SEAT's efforts to spruce things up, the Mii electric doesn't feel as modern inside as the MINI Electric. This is a complaint that can be levelled at each of the Mii/up!/Citigo trio, but it won't matter to most buyers. Build quality is solid and everything is logically laid out.

The interior design features body-coloured panels in the doors and a patterned surface across the dashboard to prevent everything looking too drab. The switchgear feels well laid-out, and – crucially – built to last, but things do feel a little dated if you look beyond the loud patterns.

There's a certain charm to this approach, though: the Mii feels just the right amount of simple and utilitarian without being sparse. The lack of a central touchscreen – such a major feature in so many cars these days – is deliberate and keeps costs down, with owners instead expected to use their phone (running SEAT's dedicated app if you like).

The Mii electric is simple from a specification standpoint, too: there's just one trim level with a good level of kit. All cars get 16-inch alloys, heated front seats, cruise control, smartphone integration, DAB radio and rear parking sensors, plus lane-keeping assistance and traffic-sign recognition systems.

LED daytime running lights, rain-sensing wipers and heated and power-adjustable door mirrors are also included as standard, plus a heated windscreen. If you don't need this level of equipment, it's worth considering the Skoda Citigo-e iV in its lower trim level, which is essentially a more pared-back version of the same car for a significantly lower price. 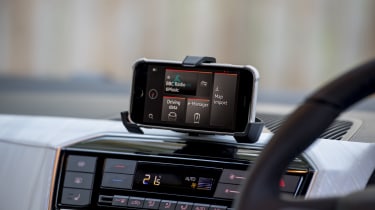 One minor gripe is that the five-inch colour infotainment screen doesn’t feature sat nav, Apple CarPlay or Android Auto: instead, SEAT has installed a smartphone holster that lets you use the navigation apps of your choice when needed.

A SEAT smartphone app allows you to heat or cool the car remotely; a useful feature if you need to warm it up on a cold morning. This same app gives you control of charging when the Mii is plugged in, so you can see how full the battery is at the tap of a button.