The Peugeot Partner Electric is slow and has a short range. It's due to be replaced soon 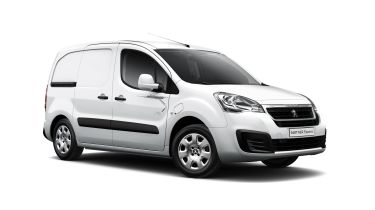 The Peugeot Partner Electric is a sister model to the Citroen Berlingo Electric. And as it was Citroen that led the development of this generation of van, the Peugeot variant is essentially a rebadged version of the Berlingo. It uses the same technology and running gear as its sister model, and like the Citroen, counts the Renault Kangoo Z.E. and Nissan e-NV200 as rivals.

Like the Berlingo, the Peugeot Partner Electric was introduced in 2015, some five years into the Partner’s model life. It’s based on an old platform that also underpinned the Peugeot 307, 3008 and 5008 and even the Peugeot RCZ coupe. Here, the platform is extended to create more load space in the back, and the Partner Electric is offered in two body lengths – L1 and L2, with the latter gaining its length behind the rear wheels. Both get asymmetric opening rear doors, and the Partner Electric is based on mid-range SE trim, so there’s a modest amount of kit, but you don’t get any useful items, such as interior pre-conditioning or sat nav to help find charging locations.

There are two charging options, with a standard socket under a flap on the offside front wing and a high-power connection on the nearside rear wing. There’s a standard three-pin charging lead that you can plug into the mains, while Peugeot also offers a high-voltage CHAdeMO plug. Thanks to the Partner Electric’s modest 22.5kWh battery, it’s possible to charge the battery from flat in eight hours from the mains if you have a dedicated wallbox installed (it’s 12 hours from a three-pin plug), meaning it can easily be done overnight, while the CHAdeMO socket can take advantage of 50kW charging, which will give an 80% charge in 30 minutes.

Power comes from a 66bhp electric motor, which is less powerful than any of the diesel Partner vans, but it makes up for this with healthy instant torque. This power goes to the front wheels through a single-speed gearbox, and the Partner Electric has a top speed of 68mph, plus a 0-62mph time of 18.7 seconds. The electric motor is linked to a pair of battery packs that are mounted in a subframe at the rear axle, which have a combined capacity of 22.5kWh. This gives the Partner Electric a claimed range of 106 miles, although real-world driving is likely to see you achieve only around 70 miles, which is the same as the newer, larger and more spacious Renault Master Z.E. can manage.

As mentioned, SE isn't the best-equipped model in the Partner range, although you can get an optional Look Pack that adds body-coloured bumpers, door handles and door trim. Air-conditioning is included (it’s optional on the Partner diesel), while three-abreast seating helps the Partner stand out from the Kangoo Z.E. and e-NV200.

On the road, the electric drive system’s instant torque gives the Partner Electric a decent turn of speed away from the lights, but it runs out of puff the faster you go. Unless you add the optional steel bulkhead behind the driving position, the Partner is surprisingly noisy for an electric vehicle. It’s near-silent at low speeds, but anything past 30mph sees road and wind noise enter the load area and echo back into the cab. 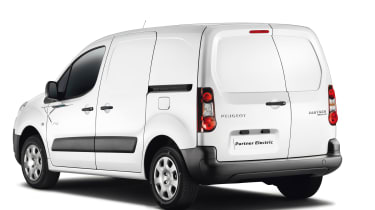 In corners, the low-set batteries don’t harm the van’s centre of gravity, but their sheer weight means the Partner Electric lumbers around. The standard Partner diesel isn’t much fun in bends and the electric version is no better. And while the extra weight of the batteries should dampen the ride somewhat, this is offset by the stiffer suspension needed to take their weight, so the Partner Electric is still pretty bouncy.

Overall, the Partner Electric, much like its Citroen sister model, seems rather dated when compared to rivals. It’s marginally cheaper than a Kangoo Z.E., but the Peugeot’s limited range, poorer performance and sparse options peg it back. In addition, this version of the Partner has just been replaced in diesel form, and Peugeot certainly won’t wait as long as last time before introducing an all-electric version of the latest model. For now, here are plenty of better electric vans on the market.

For a more detailed look at the Peugeot Partner Electric, read on for the rest of our in-depth review.